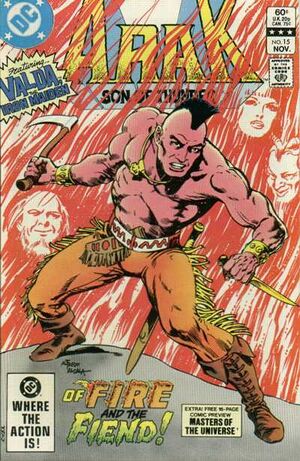 Appearing in "The Slayer From the Wine-Dark Sea"Edit

Synopsis for "The Slayer From the Wine-Dark Sea"Edit

Synopsis for "Fate Is the Killer"Edit

Everyone arrives in front of Castle Grayskull. Superman assists in retrieving one of the other missing swords and gives it to He-Man. He-Man and Skeletor fight one another and impale each other upon their respective swords. Skeletor teleports back to his lair to nurse his wounds, leaving He-Man on the ground bleeding. Zodac arrives and uses his power to heal He-Man. He then creates another dimensional tunnel and returns Superman back to Earth.

Retrieved from "https://heykidscomics.fandom.com/wiki/Arak_Vol_1_15?oldid=1409672"
Community content is available under CC-BY-SA unless otherwise noted.