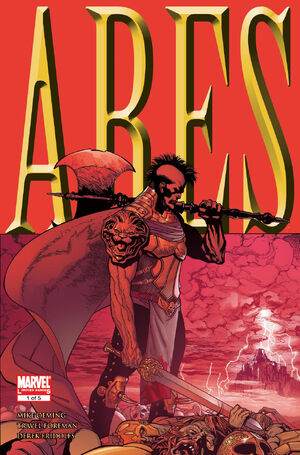 Appearing in "Ares: God of War"Edit

Synopsis for "Ares: God of War"Edit

Ares is thinking about his past life. He thinks about how the Greek gods called on him to fight Hades. They never let him back on Olympus after that because he was not honorable in his warfare and he just got the job done. Ares is then seen waiting on a parent-teacher conference about his son, Alex. They talk about how aggressive he is. Alex and Ares go home and talk a little. The next day, Ares brings Alex to school and goes to his job as a carpenter. Hermes turns up, riding a skateboard. It takes Ares a while to notice who he is. Hermes tells Ares he is needed back at Olympus to fight its enemies again. Ares refuses, and starts shooting nails at Hermes, who falls from his position standing on some scaffolding. Ares catches him and tells him to go back to Olympus and tell them he doesn't want war. Then, the whole scaffolding collapses with a huge gust of wind as Hermes disappears. Ares goes back home, only to hear by phone that Alex has gone missing. He goes to school, and yells at the police that they had better find him, and goes back home. He tells himself that its impossible to hide from his job, and opens a secret closet full of weapons. Some police officers arrive at his door, for some reason wanting Alex's social security number. Ares bashes down the door, done with shaving his beard and hair, and looking a lot more like the old Ares (albeit with more modern weapons), says "I'm going to get my boy... so you better stay the h*** out of my way!"

Retrieved from "https://heykidscomics.fandom.com/wiki/Ares_Vol_1_1?oldid=1430740"
Community content is available under CC-BY-SA unless otherwise noted.