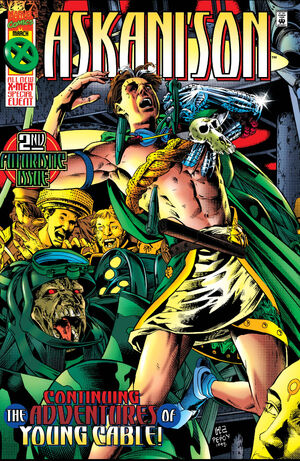 Appearing in "A Tiny Spark"Edit

Synopsis for "A Tiny Spark"Edit

Nathan and Tetherblood stop off at a "milk" bar and rest for a bit and drink some of the milk. While here they get into an argument and a New Canaanite 'Strator sees them and recognizes them as the ones who escaped from 'Strator Umbridge. They confront them and question them about who they are.

In Egypt, Stryfe and Ch'Vayre continue their plans on making Stryfe the new ruler in Apocalypse's place. 'Strator Umbridge oversees Stryfe's transactions and decides that she is going to head to Ebonshire, where the last Askani sisters are residing.

At the milk bar, 'Strator Porus goes to detain Nathan and Tetherblood and he fights back. He stops all the soldiers and suddenly Blaquesmith appears. He tells Nathan that he was to follow his orders and this was not part of them. Blaquesmith decides to teach Nathan a lesson and knocks him off his feet. He tells Nathan to stick to the plan and then disappears to the astral plane. While there he discusses with the "Professor" that he is a little "rough around the edges" and that it is time to smooth those edges out.

Stryfe meanwhile, works out of his new hideout in the Sphinx and tries to build an army out of blood and flesh with his powers. Ch'Vayre only looks on at him wondering how much longer before Stryfe goes mad. Stryfe senses his thoughts and begins to chastise Ch'Vayre. Zero stops him and announces that there is a person who could further his powers to allow him to not need human helpers. He says she is named Madame Sanctity and she is an Askani. Outside, Umbridge consults with Tribune Haight and he tells her he is not happy that she has not brought down the last two remaining Askani yet.

Nathan and Tetherblood walk thru the sewers beneath the milk bar and Nathan decides that he must go on alone to find the Askani and he leaves Tetherblood behind. Tetherblood wishes him luck and a "G'journey".

Retrieved from "https://heykidscomics.fandom.com/wiki/Askani%27son_Vol_1_2?oldid=1412056"
Community content is available under CC-BY-SA unless otherwise noted.