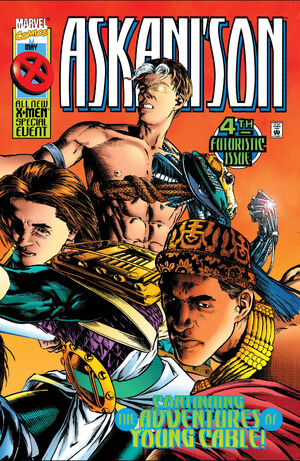 Appearing in "A Bright and Shining Light"Edit

Synopsis for "A Bright and Shining Light"Edit

Madame Sanctity announces Nathan Dayspring to her followers as the Askani'son. They all hail him. Nathan slowly removes himself from the celebrations with Aliya. He learns that she is not too fond of the teachings of her mentor anymore and that Madame Sanctity appears to be going mad. 'Strator Umbridge bids Nathan and Aliya their leave and then secretly talks to Tribune Haight who is leading an attack squad towards Ebonshire.

His new servant, Plough, appears to save him from a mutiny on the ship and kills two of the soldiers. Haight says that he needs to keep Plough by his side. Outside the ship, Stryfe, Zero and Ch'Vayre all follow the main attack ship towards Ebonshire. Stryfe finally loses it and attacks Ch'Vayre and destroys his mind, just because he could.

In Ebonshire, Aliya talks to Nathan and suddenly she is frozen. Nathan is met by Blaquesmith and he tells him that Madame Sanctity is not the teacher he was to have found. Nathan learns that this teacher is Aliya. Suddenly the Canaanites attack and Nathan throws himself on Aliya to save her. Madame Sanctity begins to destroy some of the ships. Nathan gets up and sees that his techno-organic virus is out of control and Aliya sees this for the first time. He begins to get it under control when 'Strator Umbridge attacks and shoots Aliya. She is about to attack Nathan when Plough shoots her instead. Madame Sanctity is teleported to Stryfe's ship and to the others watching it appears she is killed. Stryfe offers to work with Madame Sanctity and she agrees to this. Plough brings Nathan and Aliya to Haight and then kills his soldier Columbus. Plough removes his mask and reveals he is Tetherblood. He rescues Aliya and Nathan and Nathan tells Haight that he will be watching him and building a rebellion against Haight all along the way. They are then the first to be part of the "Clan Chosen" vow to stop Haight's work.

Retrieved from "https://heykidscomics.fandom.com/wiki/Askani%27son_Vol_1_4?oldid=1412058"
Community content is available under CC-BY-SA unless otherwise noted.