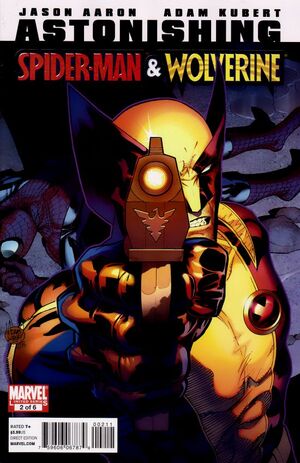 The biggest adventure that Spider-Man and Wolverine have ever been on continues! A major Marvel mystery villain is putting our dynamic duo through hell, pushing them to their absolute limits and ripping their lives apart. But how does this villain have the power to summon enemies like Doom the Living Planet to challenge our heroes?

The heroes met Orb last issue. They stopped him from robbing a bank of some diamonds, just before they got sent back to prehistoric times.

This issue references Hope Summers, when Peter states the Small Folk need Hope, Wolverine says "I can't be no messiah."

Retrieved from "https://heykidscomics.fandom.com/wiki/Astonishing_Spider-Man_/_Wolverine_Vol_1_2?oldid=1639250"
Community content is available under CC-BY-SA unless otherwise noted.