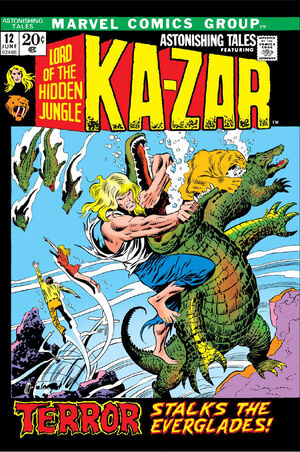 Appearing in "Terror Stalks the Everglades!"Edit

Synopsis for "Terror Stalks the Everglades!"Edit

Having been called to Miami, Florida by Barbara Morse and Paul Allen, Ka-Zar has troubles upon landing when Zabu gets loose from his cage and tries to attack people unloading the plane. Barbara and Paul manage to whisk Ka-Zar to safety before the secrecy of their mission is blown by Ka-Zar being arrested. Along the way into the Everglades, Ka-Zar is told that he was brought up from the Savage Land in order to help them find their colleague Ted Sallis. Ted had gone missing while in the process of creating a biochemical breakthrough, and they fear that Ellen Brandt -- who is in league with AIM might be responsible.

Their jeep is attacked by AIM soldiers, and they crash into the nearby swamp, where Ka-Zar and Zabu save the two scientists from alligators. Getting to land Barbara and Paul take Ka-Zar to a hospital to meet their colleague Dr. Wilma Calvin, who is in a coma. They explain to Ka-Zar that not long ago, while they were continuing their research in creating a new super-soldier serum, reports of a monster lurking the swamps spread across the area. When Barbara was held hostage by the locals, who blamed the scientists for the monster, they were attacked by the "Man-Thing", and burned by the creatures touch, Dr. Calvin was also attacked by the creature and hence why she is in a coma.

Becoming aware of that they are being watched by the very creature they have spoken of, Ka-Zar and Zabu chase after the muck-monster. The Man-Thing ends up falling into a pit, dug out by AIM, and when Ka-Zar stumbles upon the AIM foot soldiers, his battle with them is abruptly ended when he falls into the same pit as well. Ka-Zar come around to realize that he is alone in the pit with the Man-Thing.

Retrieved from "https://heykidscomics.fandom.com/wiki/Astonishing_Tales_Vol_1_12?oldid=1551570"
Community content is available under CC-BY-SA unless otherwise noted.