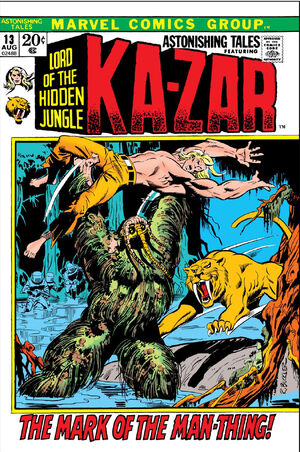 Continued from last issue... Trapped in a pit with the Man-Thing, Ka-Zar battles the creature and is surprised to find that the creature's touch does not burn him. The battle is quickly ended when the Man-Thing is knocked out by an AIM soldier's weapon. When Zabu frees himself, he attacks the AIM soldiers, and Ka-Zar soon helps his companion defeat their attackers, forcing them to retreat.

When Barbara and Paul arrive, they help Ka-Zar pull the muck-monster out of the pit and bring it back to their lab for examination. Along the way, Ka-Zar deduces that the creature's touch didn't burn him because he did not fear the creature. When one of the other scientists at the lab is shot, and that Paul and Dr. Calvin have gone missing, they catch one of the locals thinking that he's an agent of AIM. After some "convincing" from Zabu, the man confesses that he has nothing to do with AIM.

Ka-Zar, Zabu and Barbara manage to track down the AIM base, while back at the lab the Man-Thing revives and oozes through the cage holding it prisoner. While Ka-Zar battles the AIM agents stationed there, Barbara finds Dr. Calvin, and learns that Paul is a spy working for AIM. Paul holds Barbara at gun-point until the Man-Thing bursts through the wall and goes after Paul. Paul let's go of Barbara in fear of the Man-Thing, who grabs Paul. Paul is burned to death by the Man-Thing's touch. Ka-Zar manages to get himself, Zabu, Barbara and Dr. Calvin out of the base as the Man-Thing throws a switch causing the base to explode, seemingly destroying the Man-Thing.

Retrieved from "https://heykidscomics.fandom.com/wiki/Astonishing_Tales_Vol_1_13?oldid=1515689"
Community content is available under CC-BY-SA unless otherwise noted.