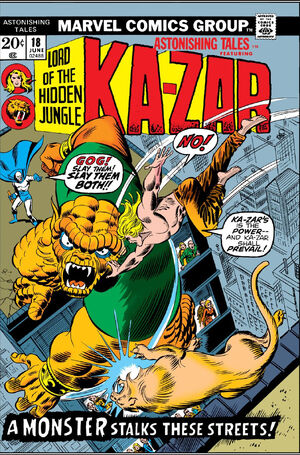 After using Gog to subdue Ka-Zar, Plunderer explains how he had been drawn to the Savage Land by the same reports of monster-sightings as the Daily Bugle staff back when Spider-Man first encountered Gog. Plunderer rescued Gog from the quicksand where he was left for dead and unexpectedly gained a mental bond with him due to the alien's developing mental capacity. They went on to forge an alliance with Gemini and AIM in their plan to steal the super-soldier serum.

Morse and Zabu arrive in a SHIELD helicopter. While Zabu fights Gemini and Gog, Bobbi attempts to bargain with Plunderer. He refuses and orders Gog to teleport them to AIM's English HQ. Instead, Gog teleports everyone to Liberty Island and doubles in size in the process. Plunderer realizes that he's lost mental control of Gog as the monster tears the torch-bearing arm off the Statue of Liberty in his attempts to communicate with it. When Gog teleports away with Zabu, Bobbi and Ka-Zar work together to get the serum back from Gemini and Plunderer before the villains escape. They then find Gog, larger still, straddling the roofs of the twin towers of the World Trade Center with Zabu cowering near one of his feet. Just as Bobbi and Ka-Zar's aircraft reaches Gog, he speaks his alien language and disappears in one last burst of teleportation, leaving Ka-Zar to suspect Gog merely wished to be free of Earth and embrace his true fate among the stars.

Meanwhile, AIM's Professor Conrad has re-discovered the original super-soldier formula in a hidden lab at Land's End. A SHIELD agent tracks him down and attempts to take it, but with overwhelming resistance from AIM's guards, he's forced to use an explosive to destroy everything in the lab, including himself. Conrad saves himself by taking the serum, and so he emerges from the flames as the sole survivor, with the power to crush anyone who stands in his way.

Retrieved from "https://heykidscomics.fandom.com/wiki/Astonishing_Tales_Vol_1_18?oldid=1410227"
Community content is available under CC-BY-SA unless otherwise noted.