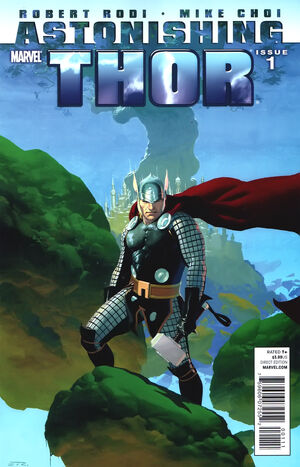 “Waves are but water, wind but air. And though lightning be fire… IT MUST ANSWER THUNDER’S CALL.” The God of Thunder finds himself battling a mysterious surge of natural catastrophes— hurricanes, tidal waves, earthquakes. At first, the Son of Odin suspects Zephyr, immortal mistress of the winds, but soon he finds that the climactic upheaval must be attributed to a much larger force… EGO, THE LIVING PLANET! From ROBERT RODI and MIKE CHOI! Spinning out of the destruction of Asgard, ASTONISHING THOR is an out-of-this-world adventure—where the entire universe hangs in the balance!

Retrieved from "https://heykidscomics.fandom.com/wiki/Astonishing_Thor_Vol_1_1?oldid=1754663"
Community content is available under CC-BY-SA unless otherwise noted.