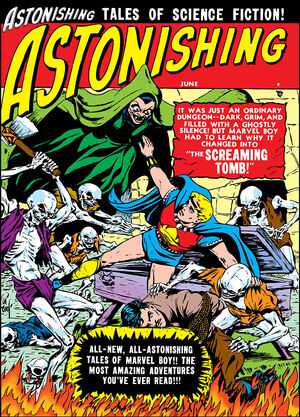 Marvel Boy is visited by his friend Starr Ryder who tells him that she is joining her father on an expedition of an old tomb in Europe for the next while, he wishes her luck on the expedition telling her that if she needs any help just call. When Starr and her father arrive in Europe, they inform their guide that they wish to search the Rosetti tombs and are informed that the tombs are haunted. Dismissing their guides claims they plan an expedition into the tombs.

As they travel deeper into the tombs they encounter vampire bats, and hear a horrible scream from down below. Despite Starr's fears, they continue on until they come across an army of the undead under the command of a vampire named Madame la Morte. As the explorers are taken prisoner by la Morte's minions, Starr manages to escape back to the surface and sends out a telegram to Marvel Boy asking for his help.

When Marvel Boy gets the telegram he takes his rocket to Europe and meets with Starr. The pair go back into the Rosetti tomb to search for her father and the missing explorers. They are soon attacked and taken prisoner by la Morte's ghouls. Marvel Boy is shackled and his wrist bands are confiscated. When one of the ghouls puts the wrist bands on, Marvel Boy tricks him into activating the light beam in them his

disintigrating his minions. Marvel Boy then knocks out the ghoul and frees himself and recovers his wrist bands. He then frees Starr and they find la Morte's inner chaimber. They attack before la Morte's minions can sacrifice Starr's father and the other explorers. His light beams destroy the ghouls while Madame la Morte flees into one of the wall tombs. Marvel Boy corners her and destroys her with his light rays and then seals her tomb up. With the threat over, Marvel Boy leads Starr and the others to safety on the surface.

Appearing in "When A Planet Dies"Edit

Synopsis for "When A Planet Dies"Edit

Marvel Boy has returned to the colony on Uranus to learn that the Uranians are suffering from a water shortage. Asking his father what the cause is, he learns that the Water Commission has been imposing rations on the planet and the requests for relief have been ignored. With the lack of water, farming on the colony begins to suffer, fires rage out of control, and needed surgeries cannot be performed.

Marvel Boy and his father work together to try and solve the water shortage problem but cannot account for why there is a shortage. They are soon informed by an assistant that there is a riot at the reservoir at Mt. Rousdel and that the reservoir is full. Marvel Boy goes out to investigate and spots the Sky Police patrolling around the area. He is shocked when he is attacked by some of the officers but manages to fight them off. Reaching the reservoir he overhears some of the officers gloating about how they are working with the Water Commissioner in controlling the water in order to take over the colony. Marvel Boy knocks them out and then releases the water. He then confronts the Water Commissioner and knocks him out, ending his bid to take control of Uranus.

Appearing in "The Walking Ghost"Edit

Synopsis for "The Walking Ghost"Edit

Diana Frost has called on the Amalgamated Insurance Company to investigate her recent inheritance of her uncle Gideon's Boston mansion. They send their agent Robert Grayson to see what the problem is. When arrives, Diana explains that she is convinced that the house has become haunted ever since her uncle's body was interned in the family mausoleum located on the property. Robert agrees to stay the night and see if the supposed haunting is real or not. He meets Gideon's former doctor.

As they are meeting, Diana spots the ghost of Gideon Frost walking across the lawn and faints. While Robert sees the ghost plain as day, the doctor denies seeing it and is convinced that Diana is hysterical. When Diana comes out of her faint, Robert agrees to solve the mystery of the ghost.

That night, Robert changes into Marvel Boy and searches around the property. He finds a secret passage way behind the fireplace. When he enters he is knocked out by an unseen assailant. When Marvel Boy comes around he finds himself in a tunnel that leads him to the inside of the family mausoleum where he finds Gideon's coffin open and empty.

Going back to the house he hears Diana screaming and catches the "ghost" trying to strangle her. Marvel Boy stops the ghost but is warned that someone is coming up behind him. Marvel Boy knocks out his other attacker and is surprised to see that it is Gideon's doctor. Marvel Boy then punches the "ghost" revealing him to be the real Gideon Frost, alive and well. When the authorities arrive, he reveals that he saved Diana's life by giving her one of his Uranium Pills making her impervious to her uncle's strangulation attempt. He then reveals that Gideon's late wife only willed him part of her fortune, leaving the rest to her niece and that both Gideon and his doctor plotted the entire ghost ruse to eliminate Diana so that they could claim the rest of the fortune.

Retrieved from "https://heykidscomics.fandom.com/wiki/Astonishing_Vol_1_4?oldid=1408083"
Community content is available under CC-BY-SA unless otherwise noted.