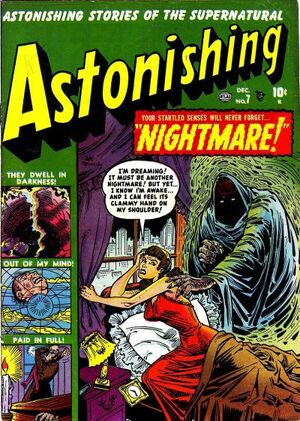 A woman has a double dream about killing her husband after her anniversary party when an old flame of his shows up and demands he murder his wife. She questions whether she is still dreaming at the end of the story.

Appearing in "Out of the Darkness!"Edit

Synopsis for "Out of the Darkness!"Edit

In the year 3999, after 2000 years of living underground due to atomic fallout, mankind has evolved to give birth to rodent men and so must return to the surface in order to survive. Monsters have evolved on the surface to live off the poisons created by atomic war so a scientist creates a machine which will disperse the poisons. The last group of humans fears that they will be overrun by the monsters, but when the machine begins dispersing the poisons so the humans can breathe without equipment, the monsters die off since they had evolved to survive in the environment that atomic war had produced.

Appearing in "Out of My Mind!"Edit

Synopsis for "Out of My Mind!"Edit

A writer's evil creation comes to life and paralyzes his hand with a touch so the writer cannot finish the character's death scene. The character tells him that he has established a gambling joint and the writer decides to pay a visit to prove to himself that he merely experienced an hallucination brought on by overwork. When he arrives he finds that the gambling joint does exist and a man resembling his creation is in charge. He shouts at the man that he is going to pay for his crimes by the sword of the executioner and the man pursues him down the stairs to silence him, but he slips and is impaled upon the sword of a statue. The writer's hand is no longer paralyzed and he can finish his novel.

Appearing in "Paid in Full!"Edit

Synopsis for "Paid in Full!"Edit

The ghost of a man who died in a snowstorm returns to the miser who refused to extend his credit. He offers the miser a bargain if he will follow him out into the snowstorm to the dead man's tomb. After the miser enters the tomb he finds that he is locked inside with no way out.

Retrieved from "https://heykidscomics.fandom.com/wiki/Astonishing_Vol_1_7?oldid=1408085"
Community content is available under CC-BY-SA unless otherwise noted.