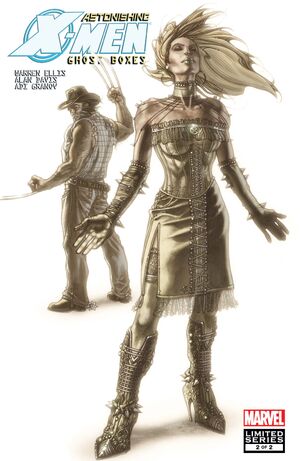 The night is peaceful. There are no ghosts here. Only me. And I won't be here long.

Appearing in "The last testament of Scott Summers"Edit

You met Subject X in the pages of ASTONISHING X-MEN. But what was he really doing and who he was doing it for? Find our in the second issue of this special 2-issue tie-in series to Warren Ellis and Simone Bianchi’s opening salvo on Astonishing X-Men! Ghost Boxes is about the real stakes of the Ghost Boxes storyline, and what will happen if the X-Men fail to solve that mystery.

Retrieved from "https://heykidscomics.fandom.com/wiki/Astonishing_X-Men:_Ghost_Boxes_Vol_1_2?oldid=1411912"
Community content is available under CC-BY-SA unless otherwise noted.