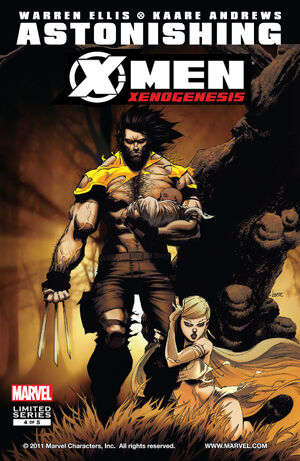 Something is causing the children of an African village to be born mutated. Something in the woodland outside the village. Something they don't talk about. But now, whatever it is, it’s being hunted, and the X-Men are trapped between the hunters and the hunted.

During the flashback, Joshua N'Dingi read a report talking about different heroes and villains, including a list of Exiles' member, although they formed far later his departure of the R.C.X.

Retrieved from "https://heykidscomics.fandom.com/wiki/Astonishing_X-Men:_Xenogenesis_Vol_1_4?oldid=1531911"
Community content is available under CC-BY-SA unless otherwise noted.