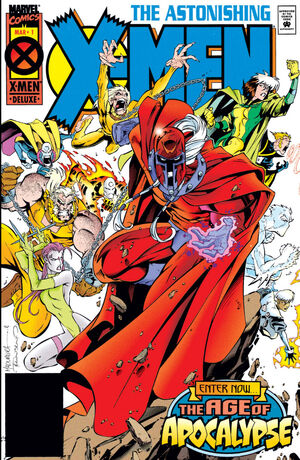 Appearing in "Once More, with Feeling"Edit

Synopsis for "Once More, with Feeling"Edit

Magneto tells the X-Men that the mission they are about to embark on is one that may cost them dearly with many lives being lost. They tell him that this mission is not any different than their others. As they talk about what is needing to be done, Blink arrives in a portal. She yells to the team to watch out and suddenly Sunfire comes crashing through the portal behind her. Magneto and Iceman calm him down and bring down his out of control powers. They turn around to see that Delgado, one of Apocalypse's Prelates, is coming through the portal and Blink closes it up on him before he gets through. Sunfire tells them that Apocalypse has allowed the cullings of the humans to resume in Chicago and they are being carried out by Holocaust.

Meanwhile, Rex enters Apocalypse's citadel in Manhattan. He stumbles upon human skeletons at the base of Apocalypse's throne. Apocalypse tells him that Delgado did make it through the portal and they closed it on him just as planned. He then asks Rex if he has tracked down the X-Men hideout and he says that it is only a matter of time till he does.

At the X-Mansion, Rogue treats Sunfire and Gambit enters to say goodbye to Rogue. They walk outside and are about to kiss secretly when Blink shows up with Charles, Rogue and Magneto's son. She brushes Gambit off and Rogue goes inside again. Gambit takes off over a cliff to begin his mission to get the M'Kraan crystal. In the attic of the mansion, Nightcrawler discusses his mission with Magneto and sees if he truly believes in what Bishop is telling them of their reality. Magneto stands behind it with his family's life. Nightcrawler takes off to go on his mission to find Destiny. Rogue is joined by Sabretooth, Blink, Morph, and Wild Child to stop Holocaust's cullings in Chicago. Quicksilver tells her goodbye and then Bishop enters in and Quicksilver tells him that he better be right and that the X-Men will fight to save their world and Bishop replies, "I am certain the Professor wouldn't have it any other way."

Retrieved from "https://heykidscomics.fandom.com/wiki/Astonishing_X-Men_Vol_1_1?oldid=1683678"
Community content is available under CC-BY-SA unless otherwise noted.