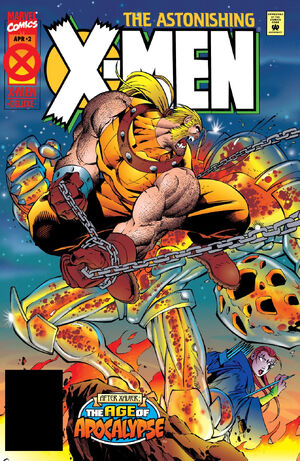 Tomorrow, as you say, this world might have to die... please, give me tonight to say good-bye to my son.

Rogue stands in a crowd of fleeing humans. They are in Chicago and above the humans on the streets are an incalculable number of probes. They are sent in to scare the humans and calculate how many humans are going to be culled by Apocalypse. Sunfire looks on and remembers the horror of his own countrymen being slain by Apocalypse's cullings in Japan.

At the X-Mansion, Magneto holds his son and realizes that he is one of the lives that will be lost if they are going to correct this alternate reality. Bishop looks on and apologizes but says that it must be done.

Apocalypse watches the videos from Maine of the X-Men helping evacuate humans using Sentinels from the Human High Council. He is enraged by Abyss' allowing this to have happened. He yells at Rex to find the X-Mansion soon. Rex appears to have located it in Westchester County, New York. Apocalypse prepares to greet Magneto himself.

In Chicago, Sabretooth looks out on the city with Blink. He tells her that he is going after Holocaust to settle an old score. He tells Blink that he needs for her to teleport him to Holocaust and then when Holocaust takes him out Blink will need to take out Holocaust. Rogue steps in and says she will not watch him waste his life. Blink phases her and then teleports Sabretooth and Wild Child off to meet Holocaust in Indianapolis. Sabretooth arrives and wakes up Wild Child. Holocaust arrives shortly and announces to them both that he is planning on building a huge number of Infinite soldiers in the factory in Indianapolis. Wild Child laughs and takes this new information back to Chicago. Sabretooth fights Holocaust and manages to break his outer shell. This does not seem to stop Holocaust and he captures Sabretooth.

Retrieved from "https://heykidscomics.fandom.com/wiki/Astonishing_X-Men_Vol_1_2?oldid=1684589"
Community content is available under CC-BY-SA unless otherwise noted.