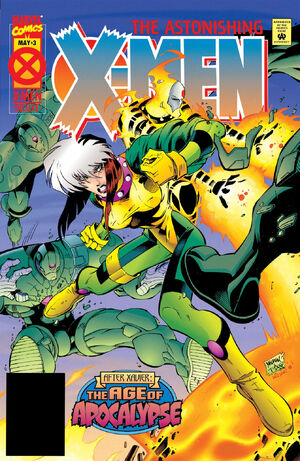 "The survival of the fittest indeed"... there are none who are fit to survive in the landscape I will create!

Wild Child finds the other X-Men in Chicago after running through the masses of Infinite soldiers. Sunfire takes out the soldiers and Wild Child runs up to Rogue and touches her so that she can "see" where Sabretooth is being held by Holocaust in Indianapolis.

In Indianapolis, Holocaust tells Sabretooth of his plans to build a huge Infinite army to use to take over the planet. Sabretooth tells him his plan is pointless. Holocaust gets angry and ties him up and then knocks him out.

Blink remembers to when Sabretooth saved her from Apocalypse's pens. She tells this to her teammates as they are flown by Sunfire to Indianapolis. Sunfire begins to get agitated by Morph's constant jokes and Morph says that it is the only way he can stay happy in this world.

At the X-Mansion, Magneto has given Bishop a weapon to test him and see if he can pull the trigger if the time comes and he had to kill someone to correct this reality from ever happening. Nanny walks in with Charles and suddenly her alarms go off and she encases the child in a cocoon and goes down to the sewers. Magneto says that this means that Apocalypse is coming.

Holocaust watches as his army begins to march by as they are being processed in his Infinite factory. Outside, the X-Men arrive and they battle a few Infinites and then Blink takes off and she finds Sabretooth bound up and she believes him to be dead.

Retrieved from "https://heykidscomics.fandom.com/wiki/Astonishing_X-Men_Vol_1_3?oldid=1685106"
Community content is available under CC-BY-SA unless otherwise noted.