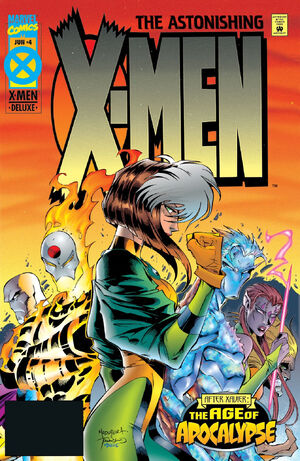 All I know for certain is that tonight, one way or another... the age of Apocalypse is over!

Blink yells out in rage over thinking that Holocaust has killed Sabretooth. She confronts him alone. They battle and he throws her at a brick wall. She teleports behind him and kicks him to the ground. She jumps on him and then teleports him into a vat of genetic "stew". The other X-Men battle Infinites and everyone is now angry with Morph since he is joking around while they are battling to their deaths.

Meanwhile, Magneto is held prisoner by Apocalypse. Magneto tells him that he will never win. Apocalypse says that he has already won and he has captured both Magneto and Bishop, brought down the Human High Council and also destroyed the X-Mansion.

Sunfire finds a few Infinites attempting to murder humans in the slave pens in the factory. He kills the Infinites and then rescues the humans. Morph runs up to Blink and asks where Holocaust is. She says he is in the vats and suddenly he busts out. Morph battles him and touches him. It turns out that Morph is actually Rogue and she absorbed his powers to get close enough to defeat him. The rest of the X-Men arrive and Holocaust hits Rogue across the room and she gets knocked out. Morph wakes her up and Holocaust explains that Magneto and Bishop are captured and her son, Charles is among those that have been taken from the X-Mansion. She does not believe him and he gets to a teleport disc and she plans to go with him to Apocalypse's citadel but Iceman saves her from this and says he was sent there by Quicksilver to make some sort of plan of attack. They say that the age of Apocalypse is coming to an end.

Retrieved from "https://heykidscomics.fandom.com/wiki/Astonishing_X-Men_Vol_1_4?oldid=1686273"
Community content is available under CC-BY-SA unless otherwise noted.