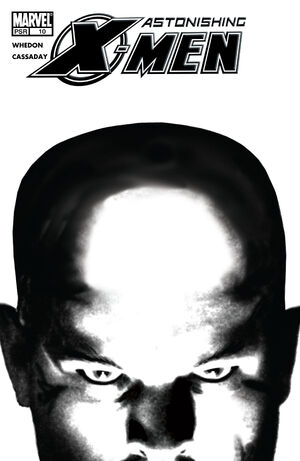 I am not you - I am designed to be "not you". You are solid. Singular. Separate. And I was the space between. My "mind" spilling everywhere: programs, connections, loops... My "body" flowing, changing, hard-light lasers creating textures, scenarios, worlds. Becoming anything, but being nothing.

The X-Men and the Danger Room entity briefly converse, but it is only allowed by the entity to let them know its only desire: to beat them to death. The battle is ferocious, however the entity is able to use its memory banks from the Danger Room to counter every strategy, as it has seem them all in battle countless times. Eventually, the X-Men fall. Some fall victim to their compassion for their own teammates’ well being, and others to just brute force. As this transpires, Special Agent Brand and her allies at SWORD, notice the destruction at the Institute. An extraterrestrial advisor is able to sense that the events are from a non-human presence, which Brand hopes will deal with their problem for them. After the battle, the entity uses the X-wing to travel to Genosha to complete its self-assigned mission, which is to kill Xavier. Xavier, however, having been in communication with the entity for a short while, tells it that it has miscalculated. While it had already fought the X-Men an untold number of times in both the Danger Room and its mind… it has never fought him!

Retrieved from "https://heykidscomics.fandom.com/wiki/Astonishing_X-Men_Vol_3_10?oldid=1488276"
Community content is available under CC-BY-SA unless otherwise noted.