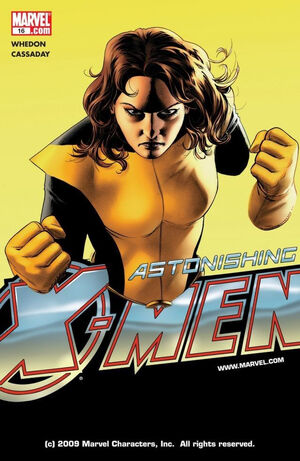 Ord of the Breakworld is free from his prison on the SWORD space station, the Peak, and is determined to remain so. Making his way through a host of agents, Ord is stopped briefly by Special Agent Brand, though he still makes his escape by jumping through a window and into the vacuum of space. There, he is rescued and taken away by Danger, piloting a space craft. Meanwhile, Kitty returns to the surface of the Institute from deep underground. She briefly checks in on Piotr and speaks with the frightened Hisako and Blindfold, before searching for Wolverine. She finds Logan in the forest on the outskirts of the Institute’s grounds, having survived and regenerated from an attack by the mentally devolved Beast. In the bowels of the Institute, Emma Frost, Ellie Phimister, Shaw, Cassandra and Perfection find their prize: a metal container, which they try to open. However, the container resists Emma’s diamond-fist blows and its defenses beat her back in turn. The group begins to argue about their next course of action, however Emma senses something amiss and goes to investigate. She discovers Kitty Pryde, who was lying in wait behind a wall. Using her phasing powers on Emma herself, Kitty takes her to a small cavern, beneath the Institute. Leaving her there, effectively imprisoned, Kitty returns to the Institute to look for students who can help. However, she is discovered by the still-terrified Wolverine – and then by the enigmatic Perfection, who reveals her identity: the White Queen! Seeing Emma, whom she just imprisoned in a cavern and appearing as she has not for years, Kitty is… confused. Meanwhile, back on the Peak, Special Agent Brand prepares to go after the escaped Ord, whose mental status might be suspect upon learning that the one mutant who was destined to destroy his homeworld was the one mutant that he had resurrected: Colossus.

Retrieved from "https://heykidscomics.fandom.com/wiki/Astonishing_X-Men_Vol_3_16?oldid=1408026"
Community content is available under CC-BY-SA unless otherwise noted.