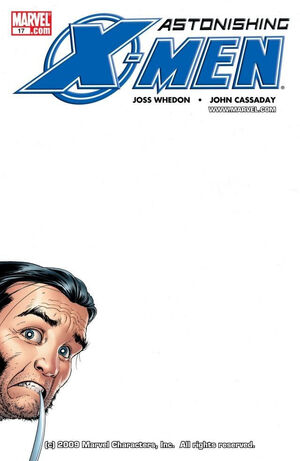 From their station in orbit, Agents Brand, Deems and Sydren watch as Ord of the Breakworld and Danger rocket to the Institute in search of Colossus, who they have discovered is destined to be responsible for the Breakworld’s destruction. Despite the threat, Brand orders Lockheed, SWORD’s mole in the Institute, not to interfere. Shortly thereafter, as Logan and a recovered Hisako go in search of Kitty, Danger and Ord arrive. However, Danger immediately realizes she is experiencing critical malfunction caused by an unknown source. As she and Ord consider their next action, they are unaware that a mentally recovered Wolverine is nearby. In the levels below, to cajole Kitty into performing their needed task, Perfection – now revealed to be “the White Queen” – telepathically has Kitty live a fantasy in her mind, where she has a son with Piotr Rasputin, named Michael, but then loses him to the X-Men. Eventually escaping incarceration, she steals into the Xavier Institute and removes her son from a containment capsule designed to keep even her out. In the real world, she has actually removed the artificial body of Cassandra Nova from her prison, much to Ms. Nova’s delight. However, before Cassandra can make use of her body, the White Queen is shot by a de-powered, though no less dangerous, Cyclops.

Retrieved from "https://heykidscomics.fandom.com/wiki/Astonishing_X-Men_Vol_3_17?oldid=1408028"
Community content is available under CC-BY-SA unless otherwise noted.