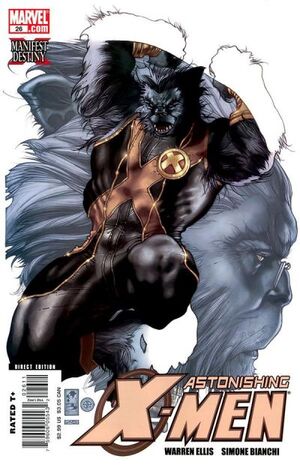 And, yes, I am a massive snob, and there was no need for you all to think it at once.

The X-Men continue investigating the mysterious murders of a "triploid" whom they previously believed to be a mutant. They fly to the Spaceship Graveyard in Chaparanga, Indonesia, hot on the trail of Subject X. Emma Frost gives the team a telepathic crash-course in Indonesian culture.

Once they arrive, they find the ruins of a spaceship which they believe contains their quarry. Armor uses her powers to give Wolverine easy access to the ship. He scurries through the bowels of the vessel until he finds the pyrokinetic Subject X. The strange-looking man is in the midst of making adjustments to a glowing cube he calls a "ghost box". Wolverine disrupts him, but the man lets loose with a burst of flame that crawls up Wolverine's arm.

Outside, Emma Frost telepathically perceives Wolverine's stress and the X-Men converge on the ship. Cyclops is prepared to do whatever is necessary to bring this man down, even if he must stoop to killing him. This notion does not sit well with his teammate Storm, but Cyclops retorts, citing that if the situation called for it, she would do the exact same thing.

They finally find Wolverine no worse for wear. After collecting him, they follow the trail back to Subject X and the Ghost Box. Upon entering the room, Subject X issues a cryptic warning, "One of us will get through. You can't stop the Annex. You're all dead already". With that, he turns his own power against himself, causing his head to explode.

Retrieved from "https://heykidscomics.fandom.com/wiki/Astonishing_X-Men_Vol_3_26?oldid=1481328"
Community content is available under CC-BY-SA unless otherwise noted.