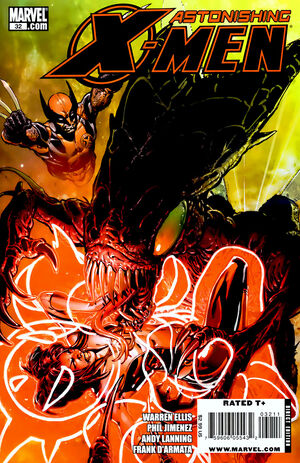 The biological Sentinel that grew from wallflower’s form attacks both as itself and with Brood grenades. Fortunately, the team manages to beat both. Afterwards, Brand comes clean that she has been trying to clean up a mess that should be SHIELD’ responsibility. Someone has cracked Beast’s data files and is now using his knowledge to try and exterminate the few mutants still extant.

Retrieved from "https://heykidscomics.fandom.com/wiki/Astonishing_X-Men_Vol_3_32?oldid=1408044"
Community content is available under CC-BY-SA unless otherwise noted.