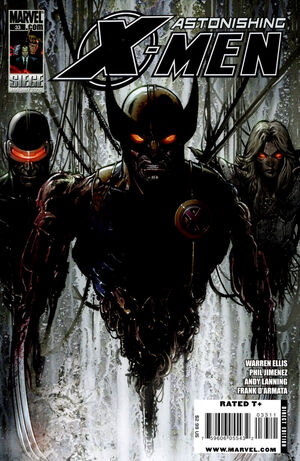 Brand confides that someone is trying to kill the X-Men using data he has stolen from the Beast’s files. Their discussion is interrupted when a Krakoa / Brood hybrid appears to recover the Brood /Sentinel the X-Men bested. Cyclops has had enough and shoots the thing apart. He reasons that another attempt at salvage will be made. When that happens, the X-Men follow the ship in their jet to a flying fortress and secretly enter it. There they learn how the villain was able to steal beat’s computer files – via the power of the dead mutant Paradigm. Cyclops has had enough and vows to kill the person behind all this.

Retrieved from "https://heykidscomics.fandom.com/wiki/Astonishing_X-Men_Vol_3_33?oldid=1408045"
Community content is available under CC-BY-SA unless otherwise noted.