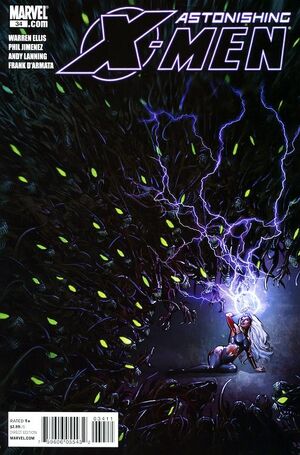 This is the bit that really annoys me. All the things in this world that can be fixed with money? And every time it's "Well, I've got all this cash, but I bought myself an asteroid hideout instead."

Cyclops and Beast have a confrontation about Henry’s research, which leads Beast to point out how Cyclops has changed for the worse under all the pressure. Though the argument becomes heated, they actually manage to agree in the end. A little later, their ship is attacked by a Sauron/Brood hybrid which the team successfully fends off. Then the ship and, the X-Men along with it, are drawn to Japan to the base of the madman behind all this, someone who is already expecting them.

Retrieved from "https://heykidscomics.fandom.com/wiki/Astonishing_X-Men_Vol_3_34?oldid=1536202"
Community content is available under CC-BY-SA unless otherwise noted.