Part of the 'eXogenetic' story arc 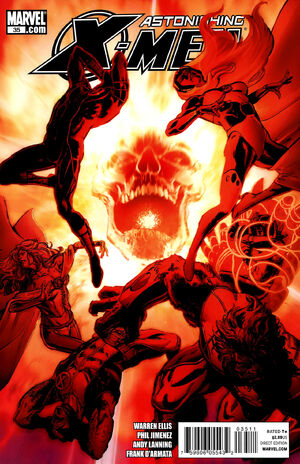 “eXogenetic” Conclusion! After wading through a swarm of bio-mechanically engineered monstrosities modeled after some of their fiercest foes, the X-Men finally come face to face with the man responsible. He’s given his life to designing the death of the mutant race and with the X-Men at his doorstep, he’s preparing to unleash one more genetic nightmare upon the world before his time runs out.

Retrieved from "https://heykidscomics.fandom.com/wiki/Astonishing_X-Men_Vol_3_35?oldid=1649203"
Community content is available under CC-BY-SA unless otherwise noted.