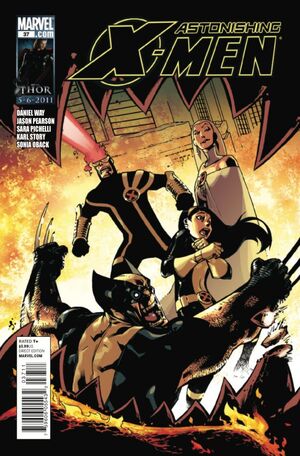 “MONSTROUS,” PART 2 OF 4 When the monstrous Fin Fang Foom attacks Tokyo, the X-Men head into action! While the Children of the Atom do battle with the reptilian menace that is Foom, Armor contends with matters of a more personal nature. Can the X-Men save Tokyo without losing Armor? Plus, a treacherous plot involving Roxxon Oil is brewing on Monster Island!

Retrieved from "https://heykidscomics.fandom.com/wiki/Astonishing_X-Men_Vol_3_37?oldid=1726782"
Community content is available under CC-BY-SA unless otherwise noted.