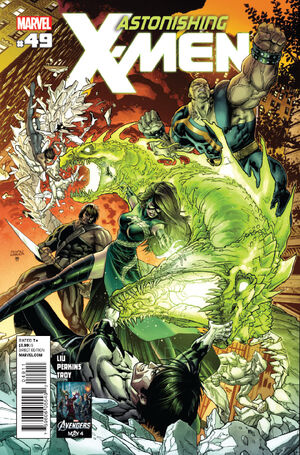 The heart. Prime piece of muscle, Logan. I've always felt the ability to teleport has never been used...creatively. By the way...how long will it take you to regrow your heart once I relocate it?

Sometime soon, Northstar is making his way through some sewage tunnels when he comes across Karma. She is badly injured, having been speared by a harpoon. She tells him that someone is waiting for him down the tunnels and then apologizes before falling unconscious. Northstar looks up to see his boyfriend, Kyle, aiming a pistol at him. He asks Northstar if he wants to race, before raising the pistol to his temple. Northstar cries out his name as the gun goes off. In the present, Chimera and the Marauders attack the X-Men, who have Cecelia Reyes by their side. She tries to aid an innocent bystander but is attacked by the mercenaries who are in collusion with the Marauders. When one fires at her, the bullet ricochets off her forcefield and kills him, leaving his colleagues who decide to run for it. The Marauders fight well against the X-Men but, when Karma manages to mentally zap Chimera out of her mind-control, the tide turns and the Vanisher teleports the Marauders, minus Chimera, away from the scene. Karma then tries to determine who has placed the Marauders under their command but, when she enters Chimera’s mind, the only things she finds are some disgusting mental guards in place. The only clue they have now to who is behind this attack is a GPS tracker discovered by Gambit. With the fighting over, Northstar and Kyle discuss their relationship, the upshot being that, despite the differences in their lives, they love each other and wish to be together. Unseen by them, they are being watched by Susan Hatchi’s assistant. She has further plans for the loving couple and the X-Men. Later that night, Karma goes to bed but wakes up when she senses something amiss. She walks into her lounge and finds Susan Hatchi, the person behind the Marauder’s attack, sitting there. She tells Karma that she did quite well breaking her hold over Chimera, so she’s curious to see how she’ll handle the X-Men.

• Something From Northstar’s Past Has Resurfaced And Is Looking For Revenge. • Kyle Goes Missing – How Is He Connected To The Person Behind Everything?

Retrieved from "https://heykidscomics.fandom.com/wiki/Astonishing_X-Men_Vol_3_49?oldid=1481334"
Community content is available under CC-BY-SA unless otherwise noted.