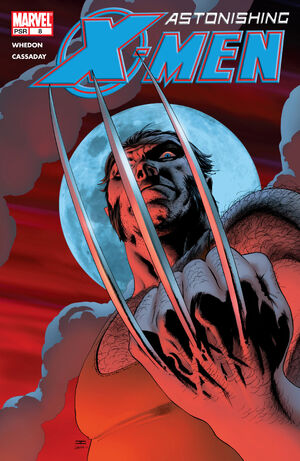 The Danger Room is Angry.

Just moments after Blindfold’s enigmatic warning, all of the telepaths and psychics in the Institute suffer a simultaneous attack, which knocks them out leaving them unable to reawaken. While the team moves them to the infirmary, miles away, a Sentinel which had been found by a local comes online, bursting forth from the barn where it had been kept. Lacking all limbs but its left arm, the Sentinel begins to drags itself toward the Institute… and its “Lord.” At the Institute, the X-Men are taking stock of their situation – the psychic attack and the still-missing student, Wing, and the inexplicable total communications blackout – when Lockheed arrives, warning them of an intrusion. When the X-Men go to investigate, they find the arriving Sentinel, who attacks both them and the school. Cyclops is able to eliminate its threat with a powerful optic blast and then order Wolverine to finish it off, while he and Colossus check on the students, whom he told Kitty to take to the Danger Room for safety. Wolverine makes short work but, before delivering the final blow, hears the unusually talkative Sentinel speak of its “Lord” and that the “children will pay for the father’s sins.” Racing back to the school, Wolverine finds that the other X-Men cannot gain entrance to the Danger Room and the children inside. As they theorize that their enemy is inside, Emma arrives with the Beast, explaining that the Danger Room itself is their enemy and that it is angry. Inside, the Danger Room has reanimated the corpse of Wing, shocking the rest of the students. Elsewhere, Special Agent Brand is awaiting the decision of the S.W.O.R.D. committee when she is visited by another agent, who informs here of the complete loss of all monitoring devices in the school.

This cover is from second printing.

Retrieved from "https://heykidscomics.fandom.com/wiki/Astonishing_X-Men_Vol_3_8?oldid=1408018"
Community content is available under CC-BY-SA unless otherwise noted.