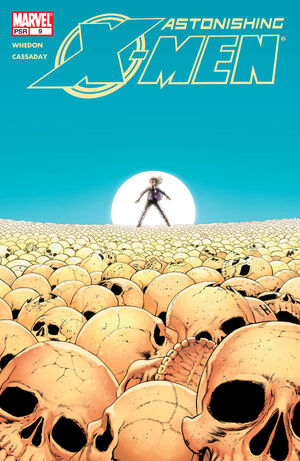 The Danger Room is Angry?

Though the X-Men can hardly believe it, Emma informs them that the Danger Room has mutated – becoming a sentient being… and is angry. Immediately, they take steps remove its computer functions by having Colossus tear through it’s “brain,” but the Danger Room defends itself by activating the X-wing jet, using it to crash through the mansion and then fire upon the team with its ordinance. Inside the Danger Room, the room continues to communicate through the animated corpse of Wing. First, it creates a hellish world to frighten the students, then changing it to a desert, which is then filled with skulls instead of sand. All the while, the Danger Room entity speaks with Kitty, explaining its actions through cryptic riddles as to its origin, purpose and transcendence. Kitty realizes too late that her teammates actions outside to destroy the entity is actually freeing it, which was its plan all along. Moments after Wolverine succeeds in destroying the sphere housing its command core, the Danger Room entity uses the wreckage of the Institute to create a robotic body – and then asks the X-Men if they “shall begin.”

Retrieved from "https://heykidscomics.fandom.com/wiki/Astonishing_X-Men_Vol_3_9?oldid=1408019"
Community content is available under CC-BY-SA unless otherwise noted.