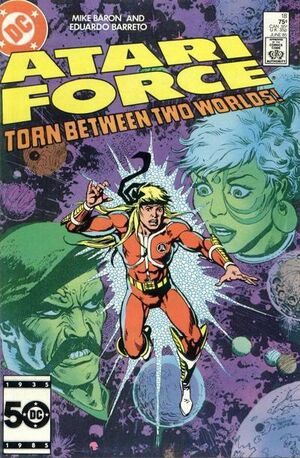 Christopher Champion (Tempest) escapes confinement on New Earth and attempts to reconnect with the people on board Scanner One, only to find himself lost in the Multiverse. With the help of Erin Bia O'Rourke-Singh (Dart), Christopher succeeds in finding his way to Scanner One, where he is greeted by his grateful father. However, the Scanner One crew has a new problem: the Tazlings are eating up all the food supplies on board the ship, and they need to find their way back to the New Earth universe before their food runs out. Blackjak, whose organic left eye has been restored, volunteers himself to be the pilot that will take the ship through a dangerous section of the Multiverse in order to reach New Earth. However, during his piloting the ship, the new organic eye causes Blackjak pain with all the sensory information it is picking up, and the Tazlings reluctantly restore his cybernetic camera eye just in time for him to finish the piloting.

Appearing in "A Boy & His Hukka"Edit

Synopsis for "A Boy & His Hukka"Edit

Young Christopher Champion takes Hukka with him to buy some action figures, before the toy store closes. Hukka stays behind, but soon finds himself pursued by the security patrol dog. Christopher realizes his pet is missing and uses his phasing ability to rescue Hukka, scaring the dog in the process.

Retrieved from "https://heykidscomics.fandom.com/wiki/Atari_Force_Vol_2_18?oldid=1430900"
Community content is available under CC-BY-SA unless otherwise noted.