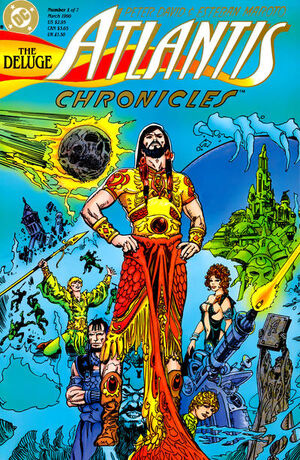 Suula is taking her vengeance, just as I knew she would! You've destroyed us, Orin!

Appearing in "Chapter One: The Deluge"Edit

Synopsis for "Chapter One: The Deluge"Edit

Orin the First, ruler of Poseidonis charges Albart of Ancinor with the task of chronicling the history of Atlantis. Albart pledges to treat this endeavor with honesty and integrity. Orin's brother, Shalako, reminds him that such a chore might not paint all Atlanteans in the best of lights.

Time passes, and Poseidonis is attacked by a tribe of neighboring savages. Orin immediately regrets bringing the art of warfare to such a people, but Poseidonis' advanced technology enables them to repulse the invaders.

The victory inspires Orin to take extreme measures to safeguard the city from future attacks. He has his scientists erect a massive dome of pumice around the entire city. The dome is porous enough to allow air and rain to pass through, but it is strong enough to repel enemy combatants. Pious Shalako, warns Orin that building this dome is an affront to Suula, goddess of the sky.

At this time, the Atlantean seer Rajar predicts a great cataclysm exists in Atlantis' future. He has detected a skull-shaped meteor in outer space that is on a direct path for Earth. Shalako prays to Suula to save their world from imminent destruction, but inwardly he suspects that Suula is responsible for bringing the meteor to the planet; punishment for erecting the citywide dome.

Orin wants to use a giant laser to destroy the meteor, but in order to properly angle it, they need to bring it into the territory governed by the savages. He sends Rajar to plead their case, citing that such a task is in the interest of both cultures. The savages don't agree with the Poseidonians' concerns and behead Rajar. In retaliation, Orin sends his soldiers to slaughter the entire tribe. They eventually activate their laser, but it has no effect against the meteor.

The meteor crashes into the Earth, causing worldwide geological upheaval. The entire continent of Atlantis sinks beneath the waves. Poseidonis survives and the dome remains intact, but all those outside the city walls are killed instantly. Historically, this event becomes known as the "Great Deluge".

Retrieved from "https://heykidscomics.fandom.com/wiki/Atlantis_Chronicles_Vol_1_1?oldid=1498299"
Community content is available under CC-BY-SA unless otherwise noted.