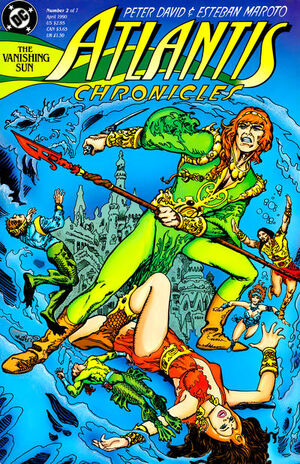 The Gods protect us! The Gods love us, and their prophet... Shalako!

Appearing in "The Vanished Sun"Edit

Synopsis for "The Vanished Sun"Edit

Years have passed, and the survivors of the Great Deluge had managed to eke out an existence for themselves within the domed city of Poseidonis, which now rests upon the ocean floor. Britton-Son-of-Cole has inherited the Atlantis Chronicles from his late uncle, Albart-Son-Of-Yarrow, and maintains the tradition of recording his nation's history. Unlike Albart however, Britton recognizes King Orin's valor, and is reluctant to write anything that casts him in an unfavorable light.

Life in Poseidonis is difficult. The streets are overcrowded and the inability to leave the protective dome is causing riots and civil unrest. Some blame King Orin for the destruction of Atlantis, while others feel that he is their savior. King Orin addresses his people, and tells them that he has constructed a navy to explore the territories outside the dome in order to see how far the destruction has spread. His brother, the priest Shalako addresses the court and announces that his followers and he will be leaving Poseidonis. He tells them of a series of underground tunnels that were built ages ago that connect all of the great cities. He intends on leading an exodus from Poseidonis to settle in the ruins of what was once the sister-city of Tritonis.

What the other Atlanteans don't yet realize, is that Shalako is mad, and has forsaken the grace of the sky goddess Suula in favor of the dark gods. He uses his magic to create a pocket of hard water that protects his wife Loma and he, as they trek forwards towards Tritonis. He uses this same magic to create a giant hard-water dome that shields Tritonis from the crushing ocean water. In order to truly protect his people though, the dark gods demand a sacrifice. Shalako murders his wife and offers up her blood as a gift to the gods. What he doesn't realize is that his son, Dardanus, witnesses the murder of his mother.

Time passes, and the people of Poseidonis grow concerned over the integrity of their own dome. Sharks and other predators stalk the perimeter of the city, often ramming themselves against the dome, hoping to shatter it. Though the dome is strong, it will only be a matter of time before it breaks.

An Atlantean scientist named Thorne invents a serum that will alter an Atlantean's physiology, enabling them to survive underwater. King Orin does not wish to spread false hope to the populace, so he volunteers to test the serum on himself first. The serum works, and Orin is able to leave the domed city and survive beneath the ocean. The experiment is a success and Orin quickly dispenses the serum to everyone in Poseidonis, transforming them into an amphibious species.

He then leads an entourage to Tritonis to offer this miracle drug to his brother and his followers. Shalako scoffs at the offer, and refuses to partake in anything that has come from Orin's "science". The Shalakites however, are not as lofty as their leader. They too wish for the freedom to leave their city, and accept Orin's aid. Shalako perceives this as a personal betrayal, and believes that Orin is trying to unseat him by currying the favor of his followers. He calls upon the dark gods to curse the people of Tritonis who have accepted Orin's serum. They are suddenly transformed into a race of green, scaly fish-people. Shalako publicly decries King Orin, blaming him for the fate of his people. Shalako's son Dardanus however, exposes his father's treachery. He tells the Shalakites that it was Shalako and not Orin who turned them into monsters. He further reveals that Shalako murdered his mother in a mad bid for more power. The crazed Shalakites turn on their former leader and kill him. They then seek out and destroy anything having to do with Shalako, murdering the rest of his wives. Dardanus though, manages to elude them.

Retrieved from "https://heykidscomics.fandom.com/wiki/Atlantis_Chronicles_Vol_1_2?oldid=1410680"
Community content is available under CC-BY-SA unless otherwise noted.