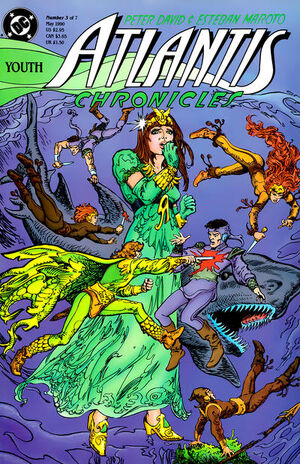 Appearing in "The Flowering of Youth, the Rightful Sinking of Age"Edit

Synopsis for "The Flowering of Youth, the Rightful Sinking of Age"Edit

Several years have passed since the people of Atlantis developed the ability to breathe and survive underwater. A group of teenage Poseidonians decide to go shark hunting, but soon find themselves more the hunted than the hunter. Fortunately, some Tritonians arrive to lend them a hand. Bazil, son of Alloroc, pries away a shark tooth which he intends to give to his childhood friend, Cora.

In Tritonis, the elderly King Stearn has taken control of the kingdom after the death of the mad sorcerer Shalako. To the surprise of everyone, Shalako's son, Dardanus, now a man, makes his presence known at the court. Everyone is shocked to see him, as it was believed that Dardanus had been killed at the same time of his father. Unlike the other Tritonians however, Dardanus was not afflicted by his father's curse and is not a merman. He tells those closest to him to begin subtly spreading rumors of his return to the people of Poseidonis.

In Poseidonis, King Orin and his wife entertain a woman named Gulacia in the Atlantean Royal Palace. Gulacia has always courted Orin's attention, much to Narmea's lament. Though Orin is flattered by Gulacia's showy display of affection, he remains loyal to his wife. This near-scandal brings him into conflict with Illya, the keeper of the Atlantis Chronicles, who has been writing passages suggesting that the king had been carrying on an affair with Gulacia. Orin forces Illya to remove the inaccurate material.

Time passes and Poseidonis celebrates Princess Cora's fourteenth birthday. Bazil is amazed at how she looks and realizes that he is deeply in love with her. Taking away the attention from Cora is the unexpected arrival of Dardanus. King Orin greets him with open arms and the two have a long discussion. As the party continues, Dardanus begins dancing with Cora. Although they are cousins, he admits a deep affection for her. Dardanus' behavior becomes very aggressive and Bazil tries to break them apart. When Dardanus refuses to stop dancing, Bazil punches him. Dardanus flies into a rage and stabs Bazil in the chest with a dagger. Miraculously, it is not a fatal injury. Dardanus is tried for his crime and sentenced to house arrest in Tritonis. Bazil's father, Alloroc, is furious when he hears of the lenient punishment.

More time passes, and Cora and Bazil grow closer and closer. They profess their love towards one another and announce their intentions to marry. King Orin and Alloroc are both elated at the news.

On the night of the wedding, Dardanus sneaks into Poseidonis and enters Princess Cora's private bedchambers. He rapes her in the middle of the night, and though Cora fights back, she is not strong enough to rebuff him. Dardanus leaves Cora pregnant with his child. She does not tell Bazil.

Retrieved from "https://heykidscomics.fandom.com/wiki/Atlantis_Chronicles_Vol_1_3?oldid=1410681"
Community content is available under CC-BY-SA unless otherwise noted.