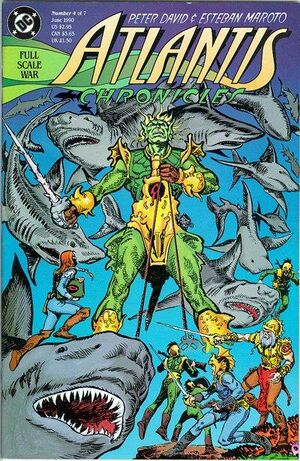 And was it normal, I wonder, for a mother to abandon her child to the harsh mercies of the depths? To take a squalling babe and leave it to die on the ocean floor?

Princess Cora, now a full-grown woman awakens from a terrible nightmare. Her teenage daughter, Fiona, comes to her bedside, but Cora mistakenly lashes out at her. She quickly apologizes, but doesn't reveal the trauma that perpetuated her dreams.

Later, Dardanus addressed the Atlantean court. He argues that the people of Poseidonis have treated their neighboring Tritonians with nothing but disdain. He also addresses how King Orin's actions in the past have led to the mutation of Tritonian children (which is actually a falsehood; the fault lies with Dardanus' own father, Shalako). Compounding the accusation, he presents a Tritonian child, born with the lower body of a fish.

King Orin takes these and other concerns to heart. Making matters worse is the fact that the serum that has enabled the Poseidonians to breathe water is now preventing them from breathing normal oxygen. Orin opens the floodgates to the city dome, letting tons of water in, filling the city. The Atlanteans now have to adapt to living as strictly aquatic people.

Back in Tritonis, a group of hunters ensnares a strange beast inside one of their nets. They struggle with the creature until their king, Dardanus, arrives to inspect their findings. Dardanus is shocked to discover that the creature they have captured is actually his own son, Kordax.

Later, Orin decides to retire as King of Atlantis. He holds a public ceremony announcing that his daughter, Cora, will now lead their people as their new Queen. Cora's husband, Bazil, will serve as the highest ranking warlord of all Atlantis. Cora's first act as Queen is to announce her daughter, Fiona, as the heir to Atlantis. Kordax suddenly appears, publicly challenging the decision. By right of birth, it is he who should inherit the throne, not Fiona. Kordax's presence forces the royal family to reveal the truth. On her wedding night, Cora was raped by Dardanus and left with child. The offspring was born with monstrous features and exiled from the city to die after it had mutilated its mother while feeding. Princess Fiona is furious at her mother for hiding the truth from her for so long.

The scandal causes heated tension between those who support Princess Fiona's right to ascension and those Tritonians who side with Kordax. Before long, both city-states go to war. Illya, keeper of the Atlantis Chronicles, is on the front line of battle so as to properly document the event. Because of this however, Illya is one of the first to be killed. The task of maintaining the Chronicles falls to her son, Regin.

Retrieved from "https://heykidscomics.fandom.com/wiki/Atlantis_Chronicles_Vol_1_4?oldid=1410682"
Community content is available under CC-BY-SA unless otherwise noted.