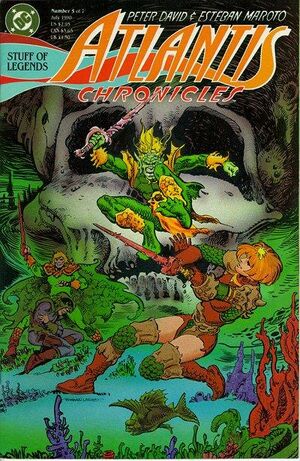 Your memory is selective, nephew. You live with the guilt of your betraying your father... and try to assuage it with laying blame elsewhere. And where, Dardanus, do you place blame for the rape of my child, eh?

Appearing in "The Stuff of Legends"Edit

Synopsis for "The Stuff of Legends"Edit

Regin, now an old man, is reading from the chronicles about the final battle of war that Kordax waged on Poseidonis.

Kordax is controlling the sea creatures and leading the Tritoneans against Poseidonis' forces lead by Orin and Bazil. Kordax's control over sealife is overwelming the forces of Poseidonis. Kordax loses control over the sea creatures as they begin to attack the Tritoneans. Kordax notices Regin (chronicler of Atlantis and lover of Fiona) and attacks him.

Meanwhile Bazil was fighting a shark when the shark bit off his right arm at the middle of the bicep. Fighting unconscieness, Bazil is confronted by Dardanus. As Dardanus swings the fatal blow, his sword is deflected by Orin. Uncle and nephew begin to fight to the death.

As Kordax is about to kill Regin, he is confronted by Fiona, brother and sister in mortal conflict. Outmatched by Fiona, Kordax calls upon the creatures of the deep to gain an advantage. However through her training Fiona disarms and defeats his older half-brother.

Orin is laid to rest in a great ceremony, but Dardanus the rapist is left for the creatures of the sea to feed on. Kordax is punish with his mother, Cora, ordering his left arm chopped off at the bicep, the same fate Kordax left for her husband. Kordax fled Poseidonis in disgrace.

His story told, Regin is interupted by his wife Fiona who tells the children that it is time for bed.

"Here ends the saga of Orin and Shalako and the first age for Atlantis."

Back in Poseidonis Kraken, the older brother of Atlan is torturing their youngest brother, Haumond when their mother, Queen Lorelei, orders him to stop. After the torture from his brother Haumond is talking to the chronicler, Dona when Atlan returns to Poseidonis bringing proof that there is life on the suface world.

Retrieved from "https://heykidscomics.fandom.com/wiki/Atlantis_Chronicles_Vol_1_5?oldid=1410683"
Community content is available under CC-BY-SA unless otherwise noted.