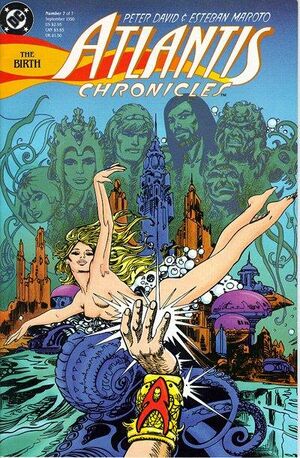 I brought the child far, far away from our land, to a place of exposure. When the tide recedes, he will be exposed to the air for a period beyond which any Atlantean could survive without replenishment. Ultimately, though, that does not matter as it is unlikely he will survive that long. Of course, if the child could breathe air for a length of time and command the sea creatures to leave him be, then he might survive. I've given him at least a chance, so perhaps... but that is nonsense. I know in my heart, the child is dead. Just as I know that he is not my child.

The Greeks and the Atlanteans choose champions to see who wins the war. The Atlantean champion, Kraken is killed by the Greek champion and he reveals himself to be Prince Haumond of Poseidonis.

Many years later in Egypt, Haumond dies of old age in the presence of his older brother, Atlan.

Milleniums later on August 16, 1492 Christopher Columbus and hid crew spotted a Mermaid in the Atlantic Ocean.

Over 400 years later the new chronicler is now Queen Atlanna as Chronicling the events of Atlantis can been prohibited. Atlanna is married to King Trevis and they are having trouble conceaving a child. One night Atlan uses his mystical abilities and seduces Atlanna, but she believes it to be a dream and that she had intercourse with Trevis while she slept.

During the pregnancy of Atlanna sea life are already responding to the baby in her womb. When she finally gives birth the doctor Vulko, Kalandro and King Trevis notice that the infant boy has the cursed blond hair of Kordax. King Trevis takes the infant to Mercy Reef and leaves him to die. King Trevis returns to Poseidonis and notices Atlanna's journal and Atlanna's latest entries and realized that the blond child was not his child. Trevis placed the Atlantis Chronicles where Atlanna would find it and then committed suicide. After King Trevis's death Atlanna found her journal and continued entries telling of her optimism that her child may have survived or that Atlan may have been wrong. She also writes that Kalandro and the Shalakite movement have taken over Poseidonis and that she may end up imprisoned or executed. She lastly states that she is going to place her journal in Great Vault where the Atlantis Chronicles are kept.

In the end the child had survived and is living with dolphins.

Retrieved from "https://heykidscomics.fandom.com/wiki/Atlantis_Chronicles_Vol_1_7?oldid=1498300"
Community content is available under CC-BY-SA unless otherwise noted.