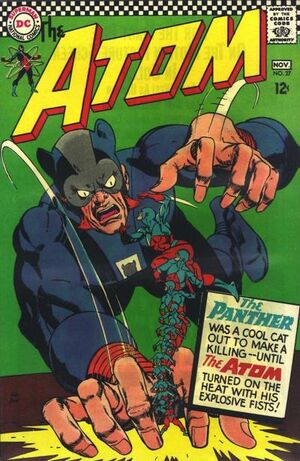 Appearing in "Beauty and the Beast-Gang!"Edit

Synopsis for "Beauty and the Beast-Gang!"Edit

Young photographer Willie Farr is head over heels in love with young Dawn Hudson and secretly photographs the girl to enter the pictures in a beauty contest. He secretly thinks that she is out of his league, while Dawn herself ponders why she doesn't have a man of her own like the other girls she knows. One night while testing out a new infra-red camera at the local zoo, he inadvertently takes a snap shot of a member of the notorious Panther Gang, who robbery of a jewelry store that night makes the Ivy Town newspapers.

The Panther Gang arrives at Willie's home where he is being visited by his friend Ray Palmer, who is discussing with Willie his secret crush on Dawn. When the Panther Gang bursts in and attacks Willie, Ray ducks away unseen and changes into the Atom and counter attacks the Panther Gang. He catches the crooks off guard, and manages to evade their attacks. After dodging a hot iron, he is knocked out and clothes pegged to the line Willi has set up to let his prints dry. The Panther Gang then finds the negative and depart to steal some crown jewels. Unable to access the size change controls in his hands, the Atom uses his momentum to swing the line into close proximity of the hot iron, burning the line until it snaps, and he lands safely in a pool of neutralizer.

Changing back into Ray Palmer, the Atom revives Willie and tells him that they were attacked by the Panther Gang. When he tells him he overheard them talking about stealing crown jewels, Willi realizes that they are going to steal the crown that was specially made for the beauty pageant that he entered Dawn into. Willie rushes out of his home to go and stop the crooks while Ray changes into the Atom once more to spring into action and stop the Panther Gang.

At the pageant, the member of the gang who works for the newspaper is on scene with a special camera that was developed by Willie that causes everyone in the path of the camera's flashbulb to black out. When the Panther Gang attempts to rob the pageant crown, the Atom is there to stop them, defeating the crooks with ease. When Willie enters the room, he spots the newspaper man and is furious that the crook is exploiting one of his own inventions and knocks him out with a single punch.

When the police arrive to arrest the gang members, the Atom introduces Dawn to Willie and it's apparent that the two have a budding romance on the horizons.

Appearing in "Stowaway on a Hot-Air Balloon!"Edit

Synopsis for "Stowaway on a Hot-Air Balloon!"Edit

Alpheus Hyatt is in for a shock when using his Time Pool and he pulls out a flaming object. His shouts for help are heard by Ray Palmer who happens to be passing by and helps put out the blaze. Exhausted after all the excitement Hyatt decides to go for a nap and leaves Ray to his own devices. Curious about what causes the fire, Ray changes into the Atom and once more enters the Time Pool.

To the Atom's shock and surprise he finds himself materializing around a hot air balloon and grabs on for dear life. Using the Time Pool's magnet to help get him down to the ground safely, he overhears two assassins, angry about the American Colonies gaining their independence, plotting to kill someone and realizes that he is in 17th Century Paris, two weeks after September 3, 1783. Hitching a ride with the assassins to learn who they intend to assassinate, the Atom realizes that this is the same period which Joseph and Etienne Montgolfier invented the first balloons.

When the two would-be assassins arrive at the farmhouse of the man they intend to kill, the Atom rallies the farm animals and sets them to attack the two men and also sneaks in a few sucker punches as well. With the killers knocked out, the fight rouses the occupant of the house: Benjamin Franklin who is oblivious to the fact that he almost got killed, and decides to notify the authorities to have the trespassers taken away. Just then Franklin is visited by Joseph and Etienne Montgolfier, who ask Franklin for his advice on how to best test if people can survive the high altitudes of their Aerostatic Machines. Benjamin offers up the farm animals as test subjects for their experiment. Satisfied the two inventors take the sheep, ducks and chickens with them, unaware that the Atom is hitching a ride so that he might get back to the Time Pool portal and get back to his own time.

When they arrive at the site of the Montgolfier's latest balloon, they find that the storm has burst it, and the Atom secretly lends a helping hand stitching it back together. Hitching a ride in the balloons maiden flight, the Atom gets close enough to the Time Pool to make his return to his own time. Not wishing to leave this era empty handed, the Atom grabs a spare pair of Benjamin Franklin's glasses that Franklin had put aboard the balloon and leaps through the Time Pool.

Returning to his own time, the Atom slips away to let Hyatt find the glasses, who recognizes their vintage but has his doubts that they are owned by their inventor Benjamin Franklin. The Atom slips away, amused at Hyatt's eventual surprise when he learns the truth.

Retrieved from "https://heykidscomics.fandom.com/wiki/Atom_Vol_1_27?oldid=1410712"
Community content is available under CC-BY-SA unless otherwise noted.