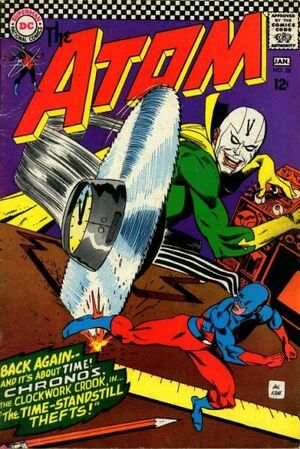 Ray Palmer is out with his friend Eva Teljas who is going to meet her father Anton, who has just recently immigrated to America. Anton would take up a job at Thornwood Jewel Salon, and would have his first job in repairing the priceless cocktail watch of Mrs. Templeton. When examining the time piece it suddenly vanishes into thin air and Mrs. Templeton accuses Anton for stealing it. This isn't an isolated incident as strange disappearances are happening all over Ivy Town: A cache of money from the bank and a rare French pistol from the 1800's also go missing. While the police invite Ray Palmer to try and solve the mystery of the disappearing items, Anton Teljas decides to take up the profession he left in Budapest, that of a detective, to help clear his name in the theft of the items as well.

That night, while Ray is working in his lab on a device that will revolutionize space travel, the device suddenly vanishes as well. Examining the situation he realizes that he's also lost five minutes worth of time, and that whoever stole the device only stole one of its components and will likely be back. Suspecting that it's his old foe Chronos, Ray decides to change into the Atom, and hide within the second component and wait for his old foe to come back. Sure enough, Ray's suspicion proves correct at it is Chronos who stole the device, and comes back for the second component.

When he does, he inadvertently take the Atom back with him to his hideout, there the Atom springs his attack however Chronos has a device, a flying buzz-saw, to counter attack. The Atom easily dodges this contraction and is ready to make a connecting blow when Chronos activates the device that allowed him to make all his spectacular thefts: A device that freezes everyone except Chronos in time. He then moves out of Atom's path and shuts off the device, causing the Atom to fall flat on his face, knocking the small hero out. Unable to remove the Atom's costume and learn his real identity, Chronos opts instead to kill the Mighty Might by tying him to the hour hand of a watch, hoping that when the minute hand passes over the hour, the Atom will be crushed to death. Chronos then goes out to steal a shipment of rare clocks found in an archeological dig, using his time freezing device to stop time and then call his sundial ship to aid him.

Anton Teljas, meanwhile, has also deduced Chronos' involvement in the thefts and has built a device that allows him to track the location of the crooks lair. Inside, the Atom comes around just as the minute hand is threatening to crush him, and uses his weight controls in his gloves to increase his weight to that the hour hand bends downward, saving the Atom from being crushed. Atom escapes the trap just in time to hop aboard the sundial craft. Witnessing the ship taking off, Anton also follows it to the ship where Chronos is currently pilfering the antique clocks.

The atom surprises Chronos, and manages to smash the crooks time freeze device. During the fight, Chronos attempts to crush the Atom with a Greek sundial. However, the Atom shrinks down to size to hide in the dials molecules. Deducing what the Atom has done, Chronos then attempts to drown the Atom by tossing the sundial into the ocean below, however the dial is caught by Anton who throws it back at the crook. The Atom then springs forth from the sundial as Chronos ducks out of the way, leaving him open to the Atom landing a knock-out punch.

With Chronos arrested and put behind bars, Anton is cleared of all the theft charges. Redeemed in the eyes of the people of Ivy Town, Anton faces increase in business as a result of his involvement in the case.

Going out to visit his fiancee Jean Loring, Ray Palmer is shocked when she suddenly shrinks down to miniature size, and passes out. This horrifies Ray as to date, the only thing that he has been able to restore back to normal size once shrunk is himself, everything else would explode due to some unknown x-factor that he has yet to discover. Rushing her to his lab, he attempts to try a gradual method of restoring her to her normal size by bathing her with controlled doses of ultra-violet radiations.

Pacing back and fourth in his lab while waiting for results, Ray discovers the problem is much larger than he had originally thought, as he looks out the window to see people all over Ivy Town suddenly shrinking in size and passing out from the ordeal. Knowing that the glass lens in his lab is impractical in restoring the population of Ivy Town to normal, Ray remembers that the Ivy Town Glassworks has just the right type of lens that he can use and rushes to in his car to collect it.

Meanwhile, some crooks are holding up a local Ivy Town bank when suddenly all the bank tellers and customers shrink in size and black out, leaving the crooks with no opposition in robbing the bank. Deciding to take advantage of it, the crooks decide to look the entire city. By coincidence they go to the glassworks first, prompting Ray to face them as the Atom. The Atom then easily defeats the crooks and locks them up. Securing the giant lenses he needs he uses a helicopter to raise the lenses high enough to bath the entire town in ultra-violet light. While operating the helicopter, Ray realizes that something in Ivy Town's drinking water must have caused all the people in town to shrink. Investigating the towns reservoir Ray finds a chunk of white dwarf star. Recovering it, he attaches a spare shrinking belt to it and reduces it down to a microscopic and harmless size.

Ray then realizes that the reason there was a delayed reaction in people's shrinking was because of the natural ultra-violet light from the sun, and that the day everyone shrunk was a cloudy day. He then dumps a chemical neutralizer removing the white dwarf's stars effect on the water supply. With everyone returning to normal, Ray takes Jean back to her home where she wakes up where Ray plays dumb about what happened, intending to "reveal" what happened later as the Atom, by telling Jean that the same thing happened to him as well.

Retrieved from "https://heykidscomics.fandom.com/wiki/Atom_Vol_1_28?oldid=1410713"
Community content is available under CC-BY-SA unless otherwise noted.