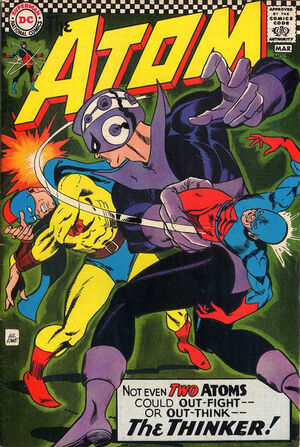 Appearing in "The Thinker's Earth-Shaking Robberies!"Edit

Synopsis for "The Thinker's Earth-Shaking Robberies!"Edit

Jean Loring is visited by her friend, soap-opera actress Cheryl Drake. Drake is in tears because the parents of her late husband are attempting to gain custody of her son after her husband Randolph Drake died in a car accident on the grounds that, as an actress, Cheryl is incapable of properly raising their grandson. Jean agree to take the case and try her best to prevent Cheryl from losing her child.

Later, while on a date with her fiancee Ray Palmer at rare book-end exhibit, Jean relates the story to her husband-to-be. As they look over the rare book ends, everyone in the exhibit hall suddenly double over in pain as though they have been hit with the bends. Ray spots the criminal known as the Thinker attempting to rob the book ends. Able to change into the Atom, Ray attempts to stop the Thinker from making off with the rare book ends, however has to fight off his henchmen when they attack him with harpoon guns. The Atom manages to fight them off, and when he turns to resume his attention to the Thinker, is shocked to see the crook escape through a portal. Looking at the other side as the portal closes, the Atom realizes that the crook has escaped to Earth-Two.

Having escape, the Thinker changes out of his costume, and drives off gloating how he can successfully rob Earth-One, and use Earth-Two as his getaway place where he is not guilty of any crimes. However, the Thinker is in for a shock when he returns home and turns on his television to find that someone else called the Thinker is pulling off similar crimes in Earth-Two, implicating the real Thinker of crimes he didn't even commit in this universe. Furious at this development, the Thinker then puts his thinking cap back on to try and determine who is the cause of these crimes on Earth-Two.

Elsewhere at the home of reformed crook Artie Perkins, Artie's girlfriend Alicia walks into his room to find the stolen book ends. Both are shocked, especially Artie who has no recollection of stealing the rare items and sincerely wants to go straight. Having promised Earth-Two's Atom that he would go straight, he calls the special number that the hero gave him in case of an emergency.

Earth-Two's Atom gets the call just after he finishes giving a class in his civilian identity of Al Pratt, teacher at Calvin College. Al decides to go and investigate, changing into his Atom costume driving to Perkins' home in his Atomoibile. As the Atom is investigating Artie, the real Thinker has setup a device to monitor the energy transmissions to determine if someone else is using it's power while he goes on his next robbery on Earth-One. As he is committing the crime on Earth-One, on Earth-Two, Artie suddenly goes into a trance and begins robbing a nearby art gallery. Having followed Artie there, the Atom attempts to stop him, but to no avail as the Artie appears to be immune to the Atom's blows and can easily bat the hero aside. Atom decides to stand back and let Artie continue his job and follows him back to his home with the stolen paintings. There Artie snaps out of his trance with no memory of the theft whatsoever.

The Thinker suddenly arrives, his device pinpointing the use of his powers to the Perkins house and attacks the two heroes. Despite the two Atom's best efforts, the Think manages to knock them and Artie Perkins unconscious. Taking them back to his hideout, the Thinker traps both Atom's and Artie in an electrified cage, and leaves to return the stolen goods from Earth-Two, making him innocent of any crimes on that Earth and resume his criminal activities on Earth-One. The Thinker however, had not accounted for the scope of the Earth-One Atom's powers. Ray shrinks himself to a microscopic size to get past the electrified cage, and uses a pair of rubbed handled clippers to cut open the cage to free Al and Artie.

Pooling their scientific knowledge together, both Atom's construct a device to track down the Thinker by detecting his thinking-cap's power output. Tracking him back to Earth-One, the two heroes catch him attempting to ancient Spanish Dubloons from the Oceanic Museum. While Al keeps the Thinker busy, Ray manages to float onto the crook's helmet and sever the relay connections on his helmet, rendering his telepathic powers inoperative. Ray and Al then land knock out blows on the Thinker and the crook is left to the authorities of both Earth's to deal with.

Later, while out on a date with Jean, Ray learns that Jean was able to successfully defend Cheryl, with the judge ruling that the baby must stay with it's mother. The two muse about how when they have children of their own Jean will have to hire a governess to help raise their child so that she can maintain her law career.

Reprinted in Crisis on Multiple Earths: The Team-Ups, Volume 2

Retrieved from "https://heykidscomics.fandom.com/wiki/Atom_Vol_1_29?oldid=1410714"
Community content is available under CC-BY-SA unless otherwise noted.