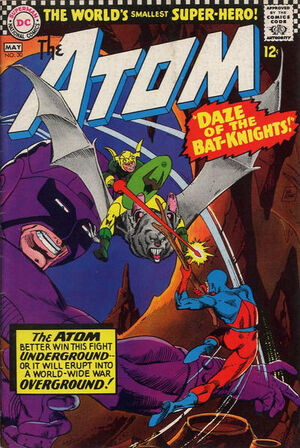 Appearing in "Daze of the Bat-Knights!"Edit

Synopsis for "Daze of the Bat-Knights!"Edit

Ray Palmer and his fiancee Jean Loring are out once more with the Ivy Town Nature Club on their annual hike. They stop at Giant Caverns for a picnic, where they are suddenly attacked by the Elvaran Bat-Knights. Overwhelmed, Ray orders everyone to flee into the tunnels while he fights off the creatures. When everyone is gone, Ray changes into the Atom and springs into action.

Knocking one of the Bat-Knights off its bat, the Atom then engages into areal combat while wondering what has caused the Elvarans to once more renew hostilities against humans after his last encounter with them when he saved them from the slavery of common crook Eddie Gordon. During the fight, the Atom is knocked out and taken to the Elvarans new masters, two costumed criminals of human stature. The masked crooks order the Bat-Knights to execute the Atom before he can wake up and cause trouble. Left alone, the two criminals unmask, one turns out to be Eddie Gordon. Following his release from prison, Gordon had teamed up with his cellmate Luke Preston, a criminal scientist who after hearing Gordon's tale of the Bat-Knights built a device to once more put the miniature people under their control to be used for their criminal plots. They had put the Elvarans under their control with a special ultra-sonic wave device, and wear special costumes to make them immune to the devices effects.

The Bat-Knights meanwhile, have carried out their orders, dumping the Atom in the Inescapable Pit of Desolation, a water filled pit where Elvarans that are executed are left to drown. While this may be an inescapable pit for Elvarans, the Atom easily escapes from the trap when he regains consciousness by returning to his normal size and climbing out of the pit.

Returning to his Atom size, Ray travels the tunnels and finds Hestera, the daughter of his Elvaran friend Olin Parr. Hestera, being unaffected by the device explains the situation to the Atom, who agrees to go and destroy the sonic boomer device that keeps the Bat-Knights under Eddie and Luke's control. Traveling through the tunnels on a bat, the Atom has to fight past a Guacharo, Salamander and a spider to get to the sonic boomer. However, as the hero gets closer, it's sonic waves begin to weaken him making him prey once more for the Salamander. The Atom manages to fight off the creature with a stick and then use the same stick to knock over the sonic boomer. With the device disabled, the Atom examines it and devises a way to track Gordon and Preston down by homing on the other sonic boomer device they use to keep the Bat-Knights under their control.

The Atom easily defeats the two crooks and frees the Bat-Knights from their control. However, when the Elvarans instinctual hatred of human beings cause them to want to kill their former enslavers, the Atom has to use the same device to stop them and make them aid him in turning Gordon and Preston over to the authorities. On their way back to the caverns, one of the Bat-Knights informs the Atom that Gordon had captured his friends in the Ivy Town Nature Society and was holding them prisoner.

Freeing them, the Atom learns that Jean is worried that something bad has happened to Ray because he wasn't captured by the others. The Atom tells Jean that he will "search" for Ray leaving the room and then returning once again having changed back into his civilian guise. Reunited with his fiancee, Ray and Jean resume their picnic with their friends.

Retrieved from "https://heykidscomics.fandom.com/wiki/Atom_Vol_1_30?oldid=1410715"
Community content is available under CC-BY-SA unless otherwise noted.