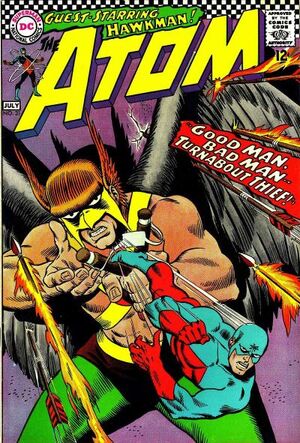 Ray Palmer is working late in his lab on a special device that will hopefully cancel out noise made by jet planes. As he works, the security alarm goes off, and he spots a gang of masked crooks trying to break into the lab. Figuring that they are there to steal some gold that he has for experiments, Ray changes into the Atom to give the crooks the surprise of their lives. During the fight, one of the crooks accidentally hits the device Ray was working on causing a loud sonic boom that strikes Mrs. Burns, the cleaning lady in the next hall. With the crooks under wraps, Ray changes back to his civilian guise and accompanies Mrs. Burns to the hospital.

There, doctors treat her with a new experimental photonoscope that uses light-photons to repair the damage to her body. Although she is physically healed, she still remains in a coma, muttering about her son Johnny and asking him to come home. Having gotten to know Mrs. Burns, Ray tells the doctors that her son walked out on her a number of years ago, and the doctors agree that tracking the young man down and bringing him to his mother might snap her out of her current state. Ray decides to try and track Johnny Burns down, as his mother mutters on about how Johnny is a good boy.

Elsewhere in the country Hawkman and Hawkgirl have tracked down a gang of crooks to their barn hideout. Coincidentally the leader of the gang is none other than Johnny Burns. During the fight, when one of the crooks attempts to shoot Hawkman in the back, Johnny suddenly has a sudden personality change and saves Hawkman from being fatally shot. Stunned by this development, Hawkman is surprised further when young Johnny has sudden remorse for the life he has lived and vowed to go straight and gives up to the alien lawman, unaware that someone watches them from the shadows. Later, after returning to their apartment, and changing into their civilian guises as Carter and Shiera Hall, the two winged crime fighters remember that they have a date in Ivy Town with Ray Palmer and Jean Loring.

While relaxing on a beach in Ivy Town, Ray and Carter exchange stories and make the connection between Johnny Burns and his mother. With some strings pulled as Hawkman, Carter arranges for Johnny to be reunited with his mother, who snaps out of her coma making for a heartwarming reunion. As Ray and Hawkman watch on, Johnny confesses to his mother that he has not lived an ideal life, but vows to serve time in jail and go straight. Just then, Hawkman gets a warning singal from Shiera, who is out shopping with Jean, prompting the two heroes to slip away from the hospital as Hawkman and the Atom to see what the commotion is about.

Arriving at Massey's, the find that the department store is being terrorized by a costumed villain known as Toyboy who uses his psychic powers to animate the toys in the department store. After fighting off Toyboy's attacks, the heroes manage to knock him out when the Atom takes control of an animated toy plane and flies it directly at Toyboy, striking the crook in the head and knocking him out. After the Atom revives from the rattling crash, the two heroes unmask Toyboy and are shocked to find that he is really Johnny Burns. Deciding to take him back to the hospital to learn what happened, the two heroes are caught off guard when Toyboy revives once again.

Breaking free, Toyboy goes on a rampage again, this time exhibiting super-human strength. The two heroes manage to defeat Toyboy once more when Hawkman fires the Atom out of a sling shot to deliver another blow to the head. Taking Toyboy to the hospital, they find that there are really two Johnny Burns', and to their surprise when they are brought into the same room together, the "nice" Johnny suddenly fades away. Snapping out of his coma, the Johnny Burns in the Toyboy costume struggles as his evil and good sides struggle for dominance, with the good side ultimately winning. Johnny explains to the two heroes that while in Midtown City battling Hawkman some strange force struck him and separated him into two distinct versions of himself, one good and one bad. Now that the two have come back together, Johnny still wishes to reform. Atom and Hawkman turn him back over to the law, wishing him the best of luck during his coming day in court.

Later, when examining the photonoscope at the Ivy Town Hospital, the two heroes deduce that the combination of being bombarded by the device Ray was experimenting on in his lab, and the photonoscope somehow briefly endowed Mrs. Burns with paranormal powers that caused her son to split into two distinct persona, thus explaining what caused this bizarre series of events. Sometime later, the law releases Johnny into the custody of his mother, and the two visit and thank Ray for his help in reuniting them together.

Retrieved from "https://heykidscomics.fandom.com/wiki/Atom_Vol_1_31?oldid=1410716"
Community content is available under CC-BY-SA unless otherwise noted.