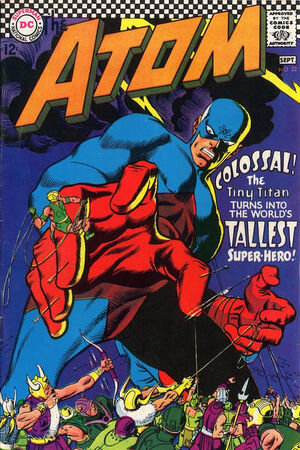 Appearing in "The Up and Down Dooms of the Atom"Edit

Synopsis for "The Up and Down Dooms of the Atom"Edit

At the Ivy Town Science fair, Jean Loring is helping Ray Palmer demonstrate a new device that will enable people to "energize" the metal of their cars making it more durable. However, a freak earthquake causes the beam of the device to strike Ray, putting him in paralysis state. Rushed to the hospital, Ray is left alone with Jean while the doctors try to understand the effect the beam had on Ray's body. Immobile, but still conscious, Ray realizes the only way to cure himself is to shrink down to microscopic size. Coincidentally, the ray has given Ray temporary telepathic powers, and he manages to command Jean to activate his invisible size control device. Ray shrinks so quickly, that Jean believes that Ray suddenly vanished and screams for the doctor to come and help.

Ray meanwhile hasn't disappeared at all, only shrunk down to the subatomic world in his hospital bed. Rationalizing that the white dwarf star material that comprises of his costume will keep him alive and that he must stay in his miniature size as the radiations from the ray would kill him if he returns to his normal size. The Atom lands on a world where a group of humanoids called the Polands have been placed on a sinking island that is surrounded by sea creatures that threaten to eat them when the island sinks next. Thinking that the Atom is a messenger from their god, Tholam, they ask the Mighty Might for help. The Atom complies, using his size changing abilities to grow to a gigantic size (relatively speaking) so that he can carry the Polands across the sea to safety.

Along the way, the Atom comes across an army of the Honds, a group warrior society that has invaded the Palonds realm. Putting the Palonds someplace safe, the Atom attacks the Honds. However, he is unaccustomed to fighting at such a large size and finds himself to big a target, and so the Atom shrinks down to size to fight the Honds in his miniature size. As the Atom fights the Honds, it inspires the Palonds that he rescued to take up arms against the Honds army and send it running.

Taken back to their home, the Atom leans how the Palonds were a peaceful people who were attacked by the Honds who took over their land and forced them into slavery. However, one day an potter named Chagon invented a device that would reflect rays of their worlds sun that can cause those exposed to it to black out. The Palonds would use it to try to fight off the Hond hordes, until one day a solar eclipse would blot out their son, making their weapons useless and the Hond invasion of Palond complete. The Honds would cease the weapons and use them to keep the Palonds in line once the sun is restored.

The Atom agrees to helping the Palonds overthrow the Honds that rule over them. In order to do so, the Atom has the group of men take large slabs of stone and polish them into mirrors. Taking them to the Hond camp for an attack, the Palonds are impressed to find that these reflective stones can deflect their enemies arrows, but also reflect back the light from their weapons.

Gaining the upper hand, the Palonds, with the Atom's help, manage to defeat the Honds and retake their homeland. To Atom's surprise, his time in this realm has also cured him of the deadly radiation that would kill him should he return to his normal size and rushes back to Earth. Reappearing in his hospital bed in his Ray Palmer identity just as Jean is walking out of the room, Ray calls out to her. Surprised to find Ray alive and well in the bed, Ray comforts Jean and protects his secret identity by telling her and the doctors that the ray only made him temporarily invisible and intangible.

Retrieved from "https://heykidscomics.fandom.com/wiki/Atom_Vol_1_32?oldid=1410717"
Community content is available under CC-BY-SA unless otherwise noted.