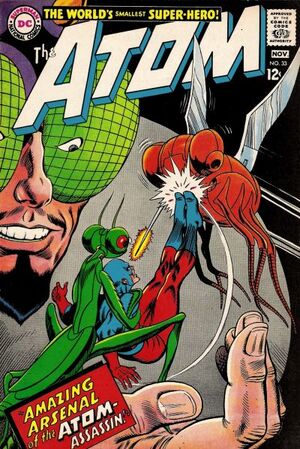 Appearing in "Amazing Arsenal of the Atom-Assassin!"Edit

Synopsis for "Amazing Arsenal of the Atom-Assassin!"Edit

Ray Palmer goes to pay a visit to Bertram Larvan at the Ivy Town prison, where he learns that Larvan still is suffering from the effects of his memory loss gas and has become a model prisoner. When visiting Larvan with the warden, Ray sees that Bertrand is still building robot insects that may have future use in the outside world. However, when showing off a mechanical bumblebee, Bertram accidentally makes the mechanical bee crash into his forehead. This blow to the head causes Bertram's memory to return, remembering his career as the Bug-Eyed Bandit, and his knowledge of Ray Palmer's secret identity as the Atom. Not letting onto this fact, Bertram returns to his cell and uses his remote control to activate on of the remaining insect robots in his lab in order to get revenge against the Atom and break out of jail.

Jean Loring is currently visiting two of her clients Helga and Carl Dornwood whom in her capacity as a lawyer, helped them adopt a young Korean orphan named Sue Shan. On his way to meet her at the Dornwood farm, Ray is suddenly attacked by the remote control insect robot of Larvan's. The attack causes Ray's car to swerve off the road and off a cliff and into the river. Soon radio reports of Ray Palmer's apparent demise hit the airwaves, and when Jean learns of Ray's supposed death, she is devastated. The inset robot meanwhile returns to Bertram and after he hears the news about Palmer's death on the radio, he has the robot bust him out of prison. Returning to his lab, Bertram dawns his Bug-Eyed Bandit costume and once more resumes his career in crime.

When the Atom next clashes with the Bug-Eyed Bandit's insect robot, it's at the Ivy Town museum, where he finds that the robot is armed with a special sonic wave button that makes him uncontrollably sneeze. Despite his best efforts, the Atom is easily defeated in combat and is knocked out. Taken back to the Bug-Eyed Bandit's hideout, the Atom's foe uses the size-change controls on Atom's belt to restore him to full size and seals him in a synthetic cocoon. When Ray revives, Bertram orders Ray to reveal the secret of his size-changing technology when he thinks the Atom's costume was destroyed, when in reality it turned invisible. Ray refuses, and the Bug-Eyed Bandit makes the cocoon cover Ray's face threatening to suffocate him. However, the Bug-Eyed Bandit does not account for the fact that there are also size-change controls within the Atom's gloves, allowing Ray to shrink down to microscopic size and break free from the trap.

With the Bug-Eyed Bandit back in police custody, Ray resumes his civilian disguise and returns to a relieved Jean Loring.

Retrieved from "https://heykidscomics.fandom.com/wiki/Atom_Vol_1_33?oldid=1496210"
Community content is available under CC-BY-SA unless otherwise noted.