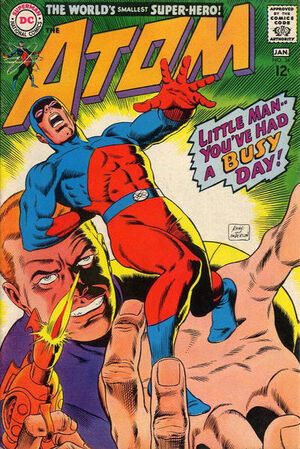 Appearing in "Little Man, You've had a Big Gang Day!"Edit

Synopsis for "Little Man, You've had a Big Gang Day!"Edit

The Big Gang, a group of crooks that use crime gimmicks involving their monikers invite a crooked magician and card trick specialist into their group as Big Deal. Their leader, mastermind Big Head introduces him to the other members: Big Ben (timing specialist), Big Wig (master of disguise wigs), Big Bertha (strong woman), Big Shot (marksman) and Big Cheese (who uses specially made cheeses with different properties.) He then shows them their stolen loot which also is part of their motif, including the worlds largest book, and worlds largest drum. Then let Big Shot in on their next heist: The theft of the worlds biggest emerald.

As it turns out, the emerald is one of the items being willed to the surviving members of a dead millionaire. As it would happen, the will is being read by Jean Loring, with Ray Palmer in her company. With the emerald being willed to the late millionaires niece, they all marvel at its gigantic size. Before things can be finalized however, Big Cheese bursts into the room with a specially made cheese that is loaded with knock-out powder. Blowing it on everyone gathered, everyone is knocked out except for Ray, whom manages to activate his size change controls just in time to avoid getting a full dose of the powder.

Chasing after Big Cheese, the Atom ends up in a pitched battle against the Big Gang on the front lawn of the estate. Although the Atom's arrival disturbs Big Ben, who theorized the Atom would not get involved until their second big heist, they manage to dispose of him when Big Bertha lobs a cannon ball at him knocking him into a nearby pond. When the Atom does not surface, Big Brain assumes that the Mighty Mite is dead and he and his gang return to base to plot their next big crime to steal the worlds biggest stamp and the worlds biggest coin.

Meanwhile, the Atom revives and returns to his civilian identity. Soaking wet he is worried how he's going to possibly explain his situation when Jean comes up with an excuse for him: Seeing her soaking wet fiancee, Jean assumes that Ray was held hostage by the Big Gang and tossed into the pond when they made their getaway. Wanting to go after the crooks, but stuck having to take Jean out for dinner, Ray feigns having caught a cold and manages to break off the date on the pretense that he is sick. However, as Ray is going after the Big Gang as the Atom, Jean calls Ray at home and is worried when she gets no answer and decides to go and investigate.

The Atom tracks the Big Gang down to the location of their next heist, the home of a millionaire who owns the worlds largest stamp and coin. The Atom once more tries to stop the group, but they succeed in escaping with the stolen loot when Big Wig tosses an exploding wig at the Atom. The crooks escape once more thinking they have killed the Atom, however the Mighty Mite has cheated death once more by shrinking down to a subatomic world to avoid the explosion. Deciding to return home to deduce where the Big Gang will strike next, Ray arrives to find Jean banging at his door. Zipping past her unseen as the Atom, Ray answers the door and pretends as though he was sleeping the whole time. After Jean helps put Ray back into bed, he realizes that since the Big Gang is obsessed with large objects there can only be one place in Ivy Town where they could have gone: Giant Caverns.

Tracking the crooks there just as they have stolen the worlds largest silver nugget, the Atom once more clashes with the Big Gang. The Atom manages to defeat the gang by using their own stolen loot against them. With the Big Gang defeated, the Atom turns them over to the police. During a question period with the press, the Atom answers a few questions and then leaves, telling them that he has a BIG date.

Retrieved from "https://heykidscomics.fandom.com/wiki/Atom_Vol_1_34?oldid=1410719"
Community content is available under CC-BY-SA unless otherwise noted.