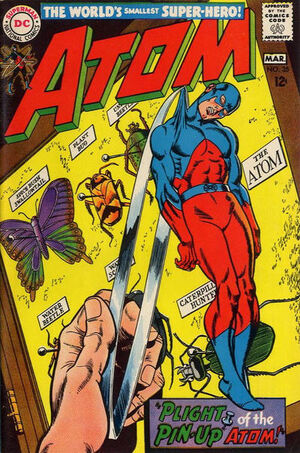 Appearing in "Plight of the Pin-Up Atom!"Edit

Synopsis for "Plight of the Pin-Up Atom!"Edit

A gang of crooks is seeking to enlist the aid of a master planner named Smarts to organize their next heist. However, Smarts is notorious for being an obsessive collector of items. This day is no exception as he suddenly decides that he wants a bottle collection and refuses to aid the crooks unless they steal him the finest collection of bottles they can find.

The next day, Ray Palmer arrives at his lab to find his assistant Enrichetta Negrini in tears. Asking her what's wrong, he learns that while her landlords have been in the hospital, their home had been broken into and their historical bottle collection had been stolen. Taking Enrichetta to the hospital to break the bad news, Ray leaves and decides to try and find out where the bottles were taken as the Atom.

Meanwhile, Smarts has given up his obsession over bottles and now wants a collection of American Primitives.[1] Realizing that there was one such painting in the Arzoni home that they robbed the night before the crooks return to cut the painting from the wall. They happen to arrive before the Atom shows up to search for clues. This leads to a fight between the crooks and the Atom. Although the Mighty Mite puts up a good struggle but is knocked out when one of the crooks uses the reverse flow of a vacuum sending the Atom crashing into a painting. Ray uses his size control device to attempt to prevent too serious an injury, in the process.

When the painting is brought back to Smarts, he notices the Atom still stuck on the painting and has the hero pinned up in his butterfly collection. However, when the Atom revives, he smashes out and easily subdues the crooks and Smarts by using Smarts' collection of stolen collectibles to trip up the crooks. Later when relating the story to the chief of police, the Atom remarks that Smarts made the same mistake many criminals have in the past: No realizing that Atom has his size control device built into his gloves and no longer needs to use his belt.

With the stolen loot returned to the Arzoni family, they decide to donate the bottles and primitives to the Ivy Town museum, on opening night Ray, Jean Loring, and Enrichetta all go to visit the exhibit.

When paying a visit to Alpheus Hyatt, Ray arrives just in time to witness Alpheus pulling an item out of the Time Pool from London circa 1671. To their surprise, it turns out to be royal jewels that belong in the Tower of London. Realizing that this item has to be returned to it's own time, Ray would leave only to return as the Atom to secretly return the "stolen" jewel back to it's proper time.

Arriving in the Tower of London through the Time Pool, the Atom has to duck and hide when Colonel Tom Blood arrives discuss an upcoming royal wedding. When they spot the Time Pool's special clamp, Blood removes it and pockets it deciding to ask the Beefeaters outside if they know what it is. Needing the clamp as his ticket back to his home time, the Atom decides to hitch a ride in the Colonel's pocket. In doing so he is witness when Blood suddenly "trips" and gets a wax impression of the guards key.

Outside however, Colonel Blood is attacked by a band of Mohocks who attempt to rob him. During the fight, the Atom secretly helps Blood fight them off to try and find out what the Colonel is up to. After the battle, Blood is met by one of his men, and the Colonel curses the Mohock attack as it ruined the way impression of the Tower's key. This leads the Atom to wonder if the Colonel is plotting to steal the royal jewels.

The Colonel then decides to trick the guard by granting him and his men access to the Tower so that they can bring the jewels to the royal couple soon to be wed. However, they rush the guard, but when they attempt to steal the jewels, the Atom springs into action and prevents Blood and his men from stealing the jewels. He then recovers the Time Pool's clam and returns to the present.

The next day, Ray Palmer pays Alpheus a visit and explains that he did research on the jewel he pulled from the Time Pool and returned it when he realized it's historical significance. Ray would go on to explain that Colonel Blood attempted to steal the jewels during the reign of Charles II, and was the only person to ever succeed. In fact, when Charles was crowned king, he would forgive Blood for the theft even going so far as making him the keeper of the crown jewels, leaving many historians to believe that this was some sort of challenge issued by the king or a jest on the Colonels part.

Retrieved from "https://heykidscomics.fandom.com/wiki/Atom_Vol_1_35?oldid=1410720"
Community content is available under CC-BY-SA unless otherwise noted.