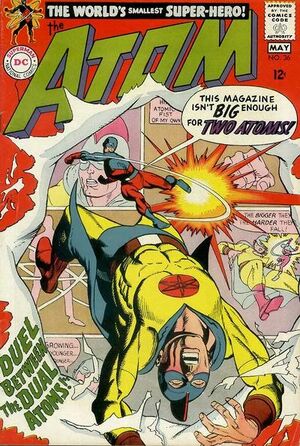 Appearing in "Duel Between the Dual Atoms"Edit

Synopsis for "Duel Between the Dual Atoms"Edit

On Earth-Two, Al Pratt is visited by his friends Bill and Betty Roberts, Betty wants to play match maker for Al and asks if he'd be interested in meeting her friend Marion Thayer. Sold on the fact that she's smart, pretty and rich, Al agrees to go on a blind date to meet her. Al, however is in for the shock of his life when she answers the door and he finds that she is a middle aged woman. Unaware of what Al is shocked by, Marion looks in the mirror and is horrified that she suddenly rapidly aged. From outside a scream comes from Bill's car and Al sees that the same thing has happened to Betty as well. Taking everyone to Calvin College to investigate, Al goes intside and hears the sound of crooks trying to blast open an wall safe with ray guns.

Changing into the Atom, Al springs into action, easily defeating the foes, he decides to take his friends home and report the crooks to the police before trying to solve the mystery. At the police station, Al learns that there are reports from all over the city that women all over the Klaxon Woods area have been rapidly aged as well. Asked for his scientific expertise, Al advises the police to send the science bureau there to investigate. Al decides to investigate in a different fashion, recalling how events on Earth-Two usually mirror what happens on Earth-One, he decides to check and see if his Earth-One counterpart, Ray Palmer, has been dealing with a similar problem in his universe.

Meanwhile, that the Ivy Town Museum on Earth-One, the Atom springs into action to stop a group of crooks from robbing antique pistols. Fighting the crooks, the are suddenly get 10 years younger, their minds also forgetting the last ten years of their lives. The crooks, not recalling why they were there suddenly bolt out of the room while the Atom has no memory of his super-heroic career, only able to recall that he is a young man about to go on his first date with Jean Loring.

Trying to figure out how to get out of his current plight of being six inches high and in a strange costume, Ray runs into Al who has just arrived on Earth-One by means of a vibrational device. Al learns of the situation from Ray and explains to Ray that he is the hero known as the Atom. Activating the size-control device on Ray's costume, Al restores Ray to his normal height and is shocked to find that Ray is 10 years younger. Ray then blows off Al's request for help and goes off for his "date" with Jean Loring. Arriving at Jean's much older and a lot more intimate, Ray is further freaked out that she says that they are going to get married. Still thinking that they are about to go on their first date, Ray freaks out until the Atom shows up and explains the situation to Jean.

Grabbing Ray, he uses his transportation device to bring them to Earth-Two where he finds that Ray has been restored to his proper age. However, when Ray changes into his Atom costume, he attacks Al, because whatever has caused Ray to become younger on his native Earth has made him hostile on Earth-Two. The two Atom's duke it out and during the battle, Al's dimensional transporter is activated, sending them to a strange alternate universe. When Al gets Ray caught up in a strange vine plant, Ray has to restore himself to his normal size, making him open for Al's knock out punch.

Taking Ray back to Ivy Town on Earth-One, Al finds that Ray has been reduced to his early teens. Believing that he is still in a high school group called the Scienceers, Ray rushes up Mount Ivy on the belief that he is late for one of their experiments. Finding a radio-transmitter up there that was recently built, the young Ray believes that it will ruin his "experiment" and begins trying to smash it with a rock. Al is unable to stop Ray before the young man damages the transmitter enough to disable it. To Al's surprise however, Ray is restored to his regular age and normal mental facilities. Realizing that Klaxon Woods has a similar transmitter on Earth-Two, the two heroes realize that this is the cause of the rapid aging on both worlds.

Traveling back to Earth-Two, the two heroes are stopped a strange radiation barrier that has appeared around the radio transmitter. Knowing that he can pass through the barrier if he shrinks small enough, Ray has Al throw him through the energy field. Although Ray is jolted pretty bad, he is still able to reach the transmitter and shut it down long enough for Al to destroy it.

With the crisis over on both Earth-One and Earth-Two and everyone restored to their proper ages, Ray and Al return to their civilian lives on their own Earth's, Al finally going on his date with Marion and Ray on a date with Jean.

Reprinted in Crisis on Multiple Earths: The Team-Ups, Volume 2

Retrieved from "https://heykidscomics.fandom.com/wiki/Atom_Vol_1_36?oldid=1410721"
Community content is available under CC-BY-SA unless otherwise noted.