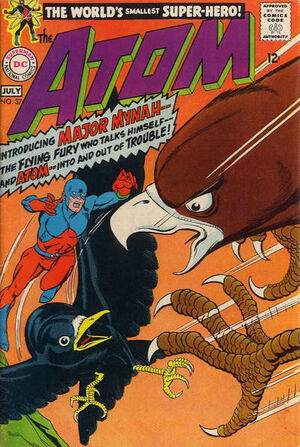 Ray Palmer has traveled to Cambodia to help out with an archeological dig of a newly discovered ancient temple. On the dig, one of the archeologists finds finds a golden statue of the Hindu goddess Sarasvati. However, the bright shiny statue is stolen by a Mynah bird that imitates Ray's demands to go away. Deciding to go after the bird as the Atom, Ray witnesses it getting attacked by a hawk. The altercation between the Mynah and the hawk damages the Mynah's wings causing it to crash to the jungle below.

The Atom pounds on the hawk until it retreats and follows after the Mynah bird by riding the wind currants to the ground below so that he can recover the gold statue. Finding the bird in another ancient temple, the Atom realizes that the Mynah bird's wings were damaged so bad it can no longer fly, he administers first aid to the bird. The temple is then stumbled upon by a group of Viet Minh invaders, whom the Atom attacks. During the fight, a wild shot breaks off the stone hand of a statue of one of the many Hindu gods, and it pins the Atom to the ground.

Distracted by the Mynah birds mimicry of their shouts to kill the Atom, the bird comes to the Atom's rescue allowing the Mighty Might to get out of danger and easily defeat the invaders. Reverting to his normal size, Ray recovers the gold statue and decides to help the little bird that saved his life.

Returning to the United States, Ray takes the bird -- whom he named Major Mynah -- to his friend Cater Hall at Midway City. Carter determines that the wings are beyond repair by Earth standards but believes that he has technology aboard his ship that might help. Changing into the Atom and Hawkman, the two heroes travel up to Hawkman's Thanagarian spaceship. There Hawkman uses it's technology to build Major Mynah a new pair of mechanical wings that allow the bird to fly up to 120 miles an hour.

Flying back home, Ray changes back into his civilian guise just as Jean arrives to welcome him back. Ray then introduces her to Major Mynah, whom Jean absolutely adores. That night when Ray goes to Ivy University he finds that the night watchman has been knocked out and the Cambodian treasures he brought home were stolen by crooks. Returning home, Ray changes into the Atom and goes hunting for the loot with Major Mynah. The two spot the crooks and easily beat them in a fight and recovers the loot.

The next evening when Jean goes to visit Ray, she is shocked when the bird suddenly blurts out words about it's adventure with the Atom. Ray has to quickly come up with an explanation and tells Jean that the bird must have been watching television and was imitating what it heard on the news. Jean accepts the explanation, however Ray thinks to himself that if he is going to use Major Mynah in future adventures as the Atom he's going to have to come with a means of disguising the bird.