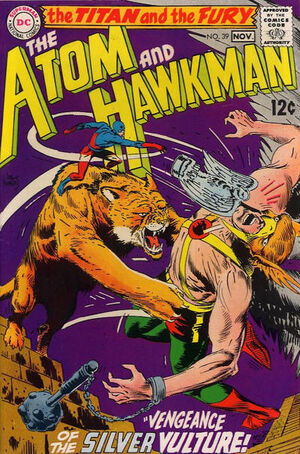 Appearing in "Vengeance of the Silver Vulture"Edit

Synopsis for "Vengeance of the Silver Vulture"Edit

The Halls and Ray Palmer, on vacation in Mexico City, are told a prophecy that wings will come between them. Shayera goes shopping alone, while Carter and Ray take a helicopter to see Mayan ruins where they rescue a boy from a trained puma. The animal was set upon him by the descendant of an ancient high priest because he had dared to stop an animal sacrifice. This priest, Tekla, has sent his followers into a dangerous mine to seek the Silver Vulture, an artifact which is a supposed harbinger of evil for the tribe. Katar stops them, and the Atom enters the mine instead. He finds the statue, but it releases gases that cause him to hate all winged creatures. When he leaves the mine, he knocks out Hawkman, and the priest gets the Vulture. Shayera is summoned to help, but is captured by Tekla, anesthetized, and dressed as a reincarnation of his high priestess. When her husband sees her, he fails to recognize her. Hawkman sends a vulture to bring Ray back, but the Atom kills the bird. The Atom returns to the village with Miguel, the boy he had helped rescue earlier, and once there, a lightning bolt restores his senses. He frees Hawkman, Hawkgirl frees herself, and they overcome the Mayans. The Silver Vulture melts on the sacrificial pyre.

Retrieved from "https://heykidscomics.fandom.com/wiki/Atom_and_Hawkman_Vol_1_39?oldid=1411822"
Community content is available under CC-BY-SA unless otherwise noted.