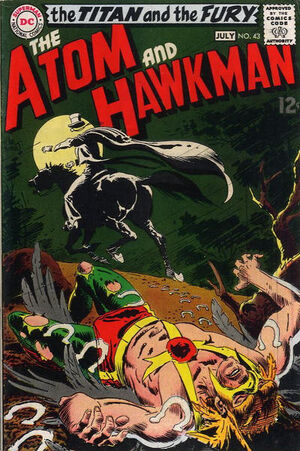 I'm the world's smallest hero... and the dumbest!

Appearing in "Come to My Hanging"Edit

Synopsis for "Come to My Hanging"Edit

Hawkman and Hawkgirl learn that the Gentleman Ghost has been staging a series of robberies at Trafalgar Square in London, England. They fly across the ocean to Europe and being investigating the sightings. They find the Ghost and his cronies near Nelson's Monument in the square. Hawkman dives into the thugs and incapacitates them with his mace, but the Gentleman Ghost manages to grab a hold of Hawkgirl. Hawkman tries to rescue her, but the Ghost and Hawkgirl both disappear.

Hawkman tracks them back to London Tower. While he fights off more of the Gentleman Ghost's henchmen, Hawkgirl manages to free herself. Hawkman chases the Ghost to the face of Big Ben. Although the Ghost escapes, Hawkman does succeed in finding where he's been stashing his loot. Hawkgirl finds a movie projector inside of Big Ben, which convinces Hawkman that they were not fighting a true spirit, but rather a con man, armed with tape recorders and trick cameras.

Appearing in "Buzzin, Buzzin -- Who's Got the Buzzin"Edit

Synopsis for "Buzzin, Buzzin -- Who's Got the Buzzin"Edit

Ray Palmer attempts to perform an experiment before his peers when suddenly a small insect distracts him, causing him to forget what he was trying to do. Horace McByrd, head of the Physics department, harshly criticizes Palmer, angering him to great length.

Ray leaves and turns into the Atom. He goes into a subatomic realm and fights a mindless monster just to let off some steam. When he returns to his office, he finds a student named Hap Coogan rifling through his files. Coogan angrily accuses Palmer of being a spy. Suddenly, that strange insect appears again and Coogan loses his memory. Palmer grows extremely suspicious and decides to follow the insect as the Atom.

He discovers that the bug is actually a micro-device designed to rob people of their memories. He traces it back to the office of Horace McByrd. McByrd confesses that he used Ray Palmer's theories to create the device and set it against him in order to discredit him. McByrd feels that he cannot match the visionary intellect of the university's younger staff members, and wanted to sabotage Palmer's career in order to improve his own standing. The Atom listens to the professor's confession then takes him off to prison.

Retrieved from "https://heykidscomics.fandom.com/wiki/Atom_and_Hawkman_Vol_1_43?oldid=1525877"
Community content is available under CC-BY-SA unless otherwise noted.