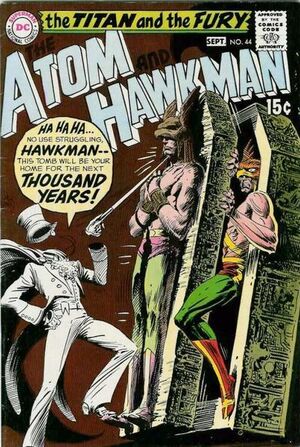 Appearing in "The Ghost Laughs Last!"Edit

Synopsis for "The Ghost Laughs Last!"Edit

Hawkman's battle with the Gentleman Ghost continues, with Hawkman steadfast in his belief that Craddock isn't a real spirit. Meanwhile, the Ghost finds a blind psychic named Zita, who falls in love with him. She tells him that her sight can be restored by exposure to a rare jewel, and he promises to get it for her, announcing that he will steal the Empress Ra-Na's necklace from the Louvre. He does so, despite Hawkman and Hawkgirl's stakeout, although his men are captured. However, this jewel is ineffective, and he steals the Fire Ruby from a Paris fashion show, again from under the Winged Warriors' noses. He escapes into the sewer system, with all evidence confirming his ghostly status. Zita's sight is restored, but the Ghost leaves her, swearing not to return until his physical body can also be restored.

Appearing in "Hate Is Where You Find It!"Edit

Synopsis for "Hate Is Where You Find It!"Edit

The Atom strives to defend a professor falsely accused of being a Nazi while dealing with a microscopically-sized invader.

Retrieved from "https://heykidscomics.fandom.com/wiki/Atom_and_Hawkman_Vol_1_44?oldid=1411827"
Community content is available under CC-BY-SA unless otherwise noted.